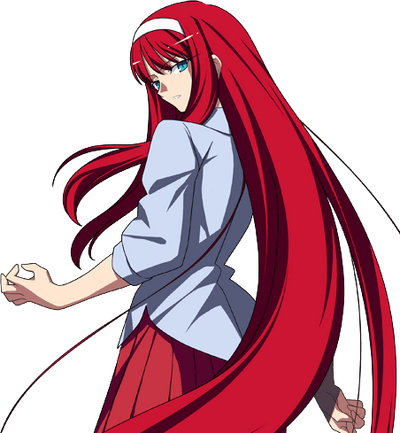 Akiha Tohno (遠野 秋葉, Tōno Akiha) is the younger sister of Shiki, and the head of the Tohno family. As with the rest of her family, she is a hybrid of human and Oni Kind, possessing supernatural powers as a result.

Speed: Subsonic with Massively Hypersonic reactions (Can keep up with and kill SHIKI)

Intelligence: Above average. Akiha is good with money and at managing things, but is an unskilled and inexperienced combatant.

Weaknesses: Akiha is an unskilled combatant and has poor aim. She can lose control of herself and go into a bloodthirsty frenzy, potentially indefinitely if she fully gives into her Inversion Impulse.

Origami: Akiha's "caging hair", which generates a cursed field of "plundering" that allows her to drain the life energy and heat of anything in her field of vision. People who can see spiritual objects will see her hair, now red, wrapped up around her victims, slowly draining their life force and burning at their skin. She can control her hair and use it as a weapon as well, and absorb heat from anything she touches. She has a high chance of becoming a Crimson Red Vermilion (紅赤朱, Kurenai Seki Shu) and fully giving into her demonic blood, and using her hair makes it hard for her to stay in control. She can potentially absorb someone's powers through her hair, but this doesn't always happen, though it is more likely on those who already have demonic blood.

Retrieved from "https://vsbattles.fandom.com/wiki/Akiha_Tohno?oldid=6718032"
Community content is available under CC-BY-SA unless otherwise noted.