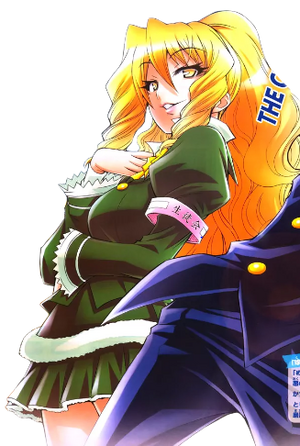 Aki Jakago is a major antagonists of the Good Loser Kumagawa side stories in the series Medaka Box.

She was the president of the Suisou Academy. Although she could be somewhat tyrannical, she was an overall good president who personally greeted and knew every student who came to the school. She used her Abnormality to maintain control and take care of trouble makers. When Misogi Kumagawa arrived at the school searching for a skill to potentially defeat Ajimu, she greeted him politely but soon realized how dangerous he truly was. She was more than happy to let him be and avoid him, but the shadow leader of the Academy, Saki Sukinasaski, manipulated the student council to attempt to eliminate him.

Attack Potency: At least Human level, likely Street level (Although she is not portrayed as being much of a physical fighter, even the weakest Abnormal should still be superior to all but the strongest Specials), higher with firearms (The weapons supplied to those controlled by Saki are capable of harming and even killing Kumagawa). Aero Biker bypasses conventional durability

Range: Hundred of Meters with firearms and Aero Biker

Intelligence: Likely Genius (Was an excellent student council president who could keep track of almost all the students in the school, and was able to determine Kumagawa was a major threat simply from him reaching his hand out for a hand shake)

Weaknesses: While Aero Biker may be known as the ultimate skill for manipulating humans, it cannot work on beings who do not need oxygen such as Ajimu. Unlike other thought based skills, Aero Biker does not seem to be instant.

Aero Biker: An Abnormality with the ability to manipulate oxygen. Said to be the ultimate ability for manipulating people, the user can force others to bend to their will by essentially extorting them via denying them the air they breath. Beyond suffocation, she can also use the ability to attack more directly by oxidizing targets or causing oxygen poisoning. While she can obviously rust away things like metal, she can also destroy things that would normally not rust, such as organic matter. Weaponry is essentially useless against her since she can turn it to dust with a thought. She can kill with the corrosion almost instantly, with the bodies rusting into dust within seconds.