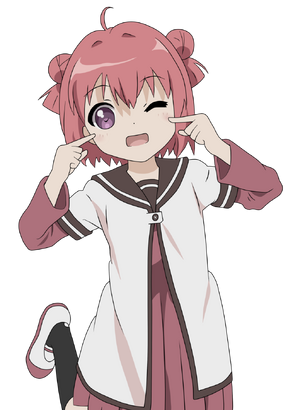 Akari Akaza (赤座 あかり Akaza Akari) (sometimes goes by "Akarin") is one of the main characters of YuruYuri. A harmony-loving, nice girl, she often stands out far less, in comparison to the other characters, so she is often bantered with her small presence. Her friends often peg her character as having the abilities to turn invisible and to fire her Odango like missiles as if they were detachable. Akane is her older sister, Kyōko and Yui are her childhood friends, while Chinatsu, Sakurako and Himawari are her classmates.

Attack Potency: Small Building level  (Disabled a U.F.O. of this size with her buns. Capable of harming opponents who can hurt her)

Speed: Average Human (Typical of a middle schooler). Unknown reaction and attack speed with her buns (Tagged a U.F.O.)

Durability: Small Building level (Can fight opponents who can hurt her, and even disable her buns. Can survive the clubhouse being completely blown up by Nishigaki's alarm clock)

Intelligence: Average (Shown to be on the same level as her classmates, but somewhat of an airhead)

Weaknesses: Doesn't have much combat experience, gets dizzy quickly

Retrieved from "https://vsbattles.fandom.com/wiki/Akaza_Akari?oldid=6950209"
Community content is available under CC-BY-SA unless otherwise noted.