VS Battles Wiki
Register
Don't have an account?
Sign In
Advertisement
in: Tier 8, Tier 8-A, Characters,
and 40 more 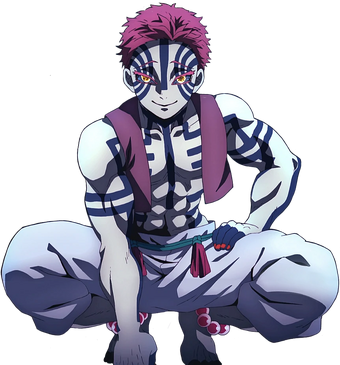 Akaza (, Akaza?) is a major supporting antagonist of Kimetsu no Yaiba. He is a demon affiliated with the Twelve Demon Moons, holding the third highest position, Upper Moon 3 (の, Jōgen no San?). As a Demon Moon, Akaza is one of the closest servants of the Demon King, Muzan Kibutsuji, whose main purpose is to find the Blue Spider Lily so that Muzan can gain immunity from the sun.

Over a century ago, Akaza was a human by the name of Hakuji (, Hakuji?), a prodigious martial artist who trained under Keizo while nursing his daughter, Koyuki, who would later become Akaza's fiancée.

Resistance to Disease Manipulation (Demons don’t get sick), Poison Manipulation (Superior to strong demons who have high poison resistance. Should be far superior to Gyutaro who shook off a poison dosage that would paralyze an ordinary demon for half a day within moments, and is inferior but somewhat comparable to Doma who can eventually adapt to poison strong enough to kill the average demon 700 times over), Pain Manipulation (Was unbothered by wounds made by Tanjiro's Dance of the Fire God techniques, which were stated to be especially painful by Daki), Regeneration Nullification (Up to High-Mid; Could regenerate from Tanjiro's Dance of the Fire God techniques which nullify regeneration), Fear Manipulation and Paralysis Inducement (Despite being paralyzed in fear by Muzan's aura, he's immune to the aura of Lower and Upper Moons that cause a similar effect but on a much lesser scale)

Durability: Unknown, Multi-City Block level with his neck (While the durability of a demon's body is inconsistent and can be hurt by weaker foes, their necks are their most durable body part and can tank attacks from characters who are comparable to their AP)

Intelligence: Gifted (With over a century of combat experience and martial arts training under his belt, Akaza is able to fight effectively with foresight and tactical intelligence. This even surprised Giyu, who stated that Akaza could instantly evolve and adapt to any attack or technique that he uses, to the point that he can predict when his opponents will strike and how to counter them with equal power. Before he became a demon, Akaza has displayed natural aptitude in martial arts, shown when he was capable of beating up trained swordsmen from neighboring dojos while still in the midst of learning Keizo's Soryu Style. This is further exemplified when he could fight and defeat grown men without martial arts training)

Weaknesses: Sunlight reduces him to ashes. Wisteria is poisonous to him. When reminded of his days as a human, and his late fiancé, he loses the will to fight and allows himself to die.

Compass Needle (, Rashin?): Akaza manifests a light blue snowflake-shaped compass underneath him with numbers ranging from 1 to 12. This technique allows Akaza to sense a person's "Battle Spirit (, Tōki?)", a person's will to fight, which he uses to achieve numerous effects while in combat. Firstly, he is able to determine the strength of anyone at a glance, such as when he discerned that Kyojuro was a Pillar just by looking at him. Secondly, Akaza is able to detect the presence of his opponents in his immediate surroundings (even in his blind spots) and can use this to predict where and how his opponents will strike him. This technique also allows Akaza to tell where his target's weaknesses are located and instinctively aim for them. Furthermore, the precision of Akaza's attacks are greatly enhanced, to the point where Tanjiro stated that it was like magnets were pulling his fists towards his vitals, and even described them as having "unparalleled precision". This is hinted at when a slight scrape from his kick (even while his sword had blocked it) caused Tanjiro to bleed. Moreover, Tanjiro also stated that Akaza was able to pierce through any opening in his attacks without fail. Another trait of his Compass Needle allows him to reactively adapt to his opponent's attacks, learning to anticipate their techniques and attack forms and even strike back with equal accuracy over time. Additionally, the stronger a person's Battle Spirit, the stronger the response of his Compass Needle. His Battle Spirit detection is so accurate that he can find the location of Tanjiro in his surroundings and fight and overpower Giyu without a head, meaning that he is performing those feats while basically being deaf and blind.

Tanjiro spilling blood from his nose... 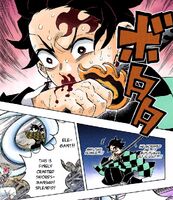 ...despite blocking Akaza's kick with his blade and only getting grazed by it.

Akaza predicting an attack from behind him... 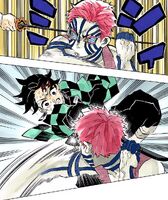 ...and unleashing a high accuracy counterattack... ...that Tanjiro implied would've split his torso in two.

Void Style (, Kūshiki?): Akaza punches the empty air in front him, creating a shockwave that flies towards his enemies and hits them from afar. These airborne shockwaves can be created multiple times in quick succession and can be unleashed in the sky or on the ground.

War Style (, Ranshiki?): Punching rapidly in front of himself, Akaza creates a barrage of large shockwaves. This attack was capable of overpowering Kyojuro's Flame Tiger technique.

Obliteration Style (, Messhiki?): One of Akaza's most powerful techniques. Akaza crouches with both his arms at the side of his body poised to strike. He then lunges forward, creating two powerful circular shockwaves from the palm of his hands which he uses to strike his target with tremendous force. This technique was strong enough to go through Kyojuro's most powerful attack, Purgatory.

Crush Style: Willow of a Thousand Flashes ( , Saishiki: Manyōsen Yanagi?): A powerful downward punch that delivers a large shockwave into the ground which expands outward.

Leg Form: Ring of a Thousand Flying Planets ( , Kiyakushiki: Hyūsei Senrin?): A kick that utilizes a flowing motion which strikes Akaza's target from below and launches them upward.

End Style: Chaotic Blue Metal Afterglow ( , Shūshiki: Aogin Ranzankō?): Akaza's ultimate technique. Akaza unleashes an omni-directional barrage of countless thin and sharp shockwaves that deliver a hundred blows to his target coming from everywhere almost at the same time. This attack was so powerful that it could negate Giyu's Dead Calm technique, a move known for its immense defensive capabilities. 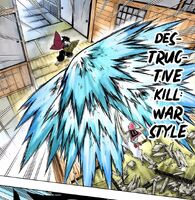 Willow of a Thousand Flashes

Ring of a Thousand Flying Planets