For more detailed information about this series, visit the Mizuumi Wiki. 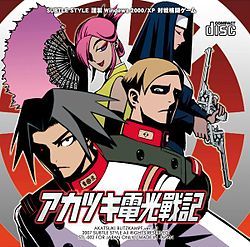 Akatsuki Blitzkampf (アカツキ電光戦記 Akatsuki Denkō Senki) is a doujinshi fighting game developed by Subtle Style. Released on April of 2007 as a sequel to Subtle Style's 2002 game Akatsuki Shisei Ichigou, Akatsuki Blitzkampf got a lot of attention in Japan and elsewhere for its high-resolution sprites and older style gameplay. In-game visuals supplement this sort of specific militaristic theme and environment, portrayed by the flat and somewhat cubist character portraits and story sequence images. Also, the gratuitous amount of extra modes the game provides (such as Survival, Time Attack, or SUGOROKU) and the ways that they are unlocked is largely reminiscent of a console release of an arcade fighting game, further reinforcing the semi-retro feel. On 2007, Arcadia Magazine confirmed that the game would be launched as an arcade title, published by SUBTLE STYLE itself. The Arcade game was called Akatsuki Blitzkampf Ausf Achse and it was released on 2008 for the Sega NAOMI system. It included new artwork, graphics and voice tracks, improved versions of some characters, etc. The trend would be continued in 2011 with the sequel En-Eins Kanzen Sekai aka Ein-Eins Perfektewelt.

Story of the Verse

The game itself is set in a fictional future (year 266X AD), and involves characters that more or less resemble the German and Japanese soldiers of World War II. The protagonist is a top officer of this alternate universe's equivalent of the Imperial Japanese Navy, the titular Akatsuki, who was believed to have died 50 years ago during a very important weapon transporting mission in the Arctic Pole. Now that he has "returned" to life and has acquired several new powers, Akatsuki wants to finish what he started... but since he's stuck in a strange land that he doesn't really recognize anymore and there are many people going after the power he holds, which can potentially change history depending on which country gets his hands on it, this goal will NOT be easy to fulfill.

In terms of physical stats, the verse can be called fairly weak or average, with the high tiers being at Building level while their speed capping at Subsonic.