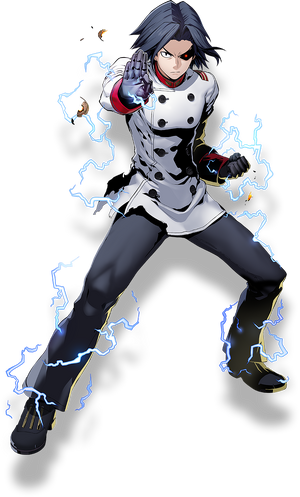 Akatsuki used to be a high-class technical officer of the Imperial Army. He was believed to have died at the critical in the Arctic Ocean during the transportation of a new military unit from an allied country. Fifty years later, he miraculously returns alive and unchanged in appearance. He now resumes his mission, finishing what he started five decades prior.

Speed: Subsonic (Capable of blocking electricity from the likes of Adler and Soldat even in point blank)

Lifting Strength: At least Class 25 (Comparable to Kanae in strength)

Stamina: High (As a professional soldier, he should be in peak human condition)

Intelligence: Above Average; as a high-class technical officer he should be well-versed in technology and machines.

Retrieved from "https://vsbattles.fandom.com/wiki/Akatsuki_(Akatsuki_Blitzkampf)?oldid=5257994"
Community content is available under CC-BY-SA unless otherwise noted.