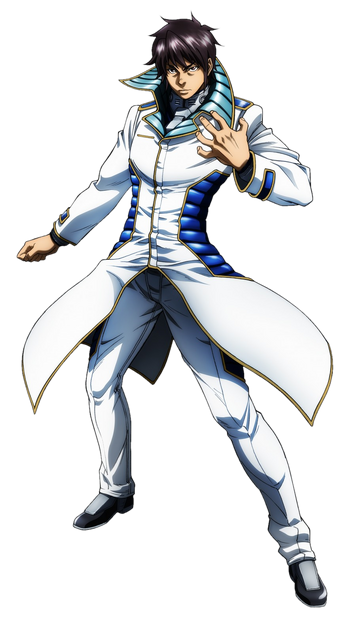 Akari Hizamaru (膝丸 燈, Hizamaru Akari) is a young Japanese man and trained martial artist. After the death of his childhood friend, he chose to join the Annex Project to find the cure of the deadly A.E. virus that afflicts the Earth. He is also one of the few people, who were born Post-Surgery.

Attack Potency: Wall level (Killed a bear in a single attack, comparable to Michelle K. Davis) | Small Building level (Effortlessly cut through a tentacle and wing of the Kuzuryu spaceship)

Speed: Peak Human with Subsonic reactions (Narrowly dodged a punch from a Terraformar) | At least Subsonic+ (Able to easily cut apart from bullets from multiple shooters)

Stamina: High; able to fight all day against hundreds of Terraformars by himself.

Range: Tens of metres with thread, extended melee range with a sword.

Intelligence: High. Akari was raised in an orphanage by a talented martial artist and learned both hand-to-hand fighting techniques and swordsmanship techniques from a young age.

Weaknesses: Akari requires the Metamorphosis drugs in order to fully transform and his transformation has a time limit of effective use. Using his latent insect powers without the drug can make Akari mentally unstable.

Orchid Mantis Base: Akari inherited the Orchid Mantis abilities of Ming-Ming; though he could draw upon this latent ability in his base form, he could only fully use it by transforming with the Metamorphosis drug.

Chimera Blood Operation: Akari Hizamaru underwent an improved version of the M.O. operation back on Earth after the Annex 1 mission. The C.B. operation allows him to temporarily mimic the base abilities of another individual after either injecting their blood or digesting it. The former method lasts for approximately four minutes while the latter can last about ten seconds.