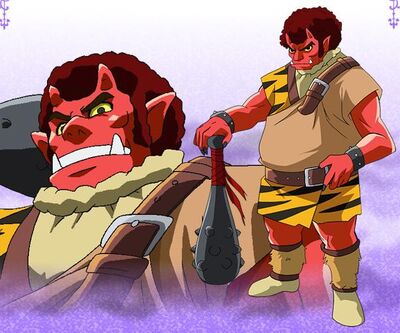 Akaoni (Brute in English translations) is one of the four members of the Bad End Kingdom trying to revive Emperor Pierrot by collecting negative energy from humans and other forms of life on Earth. He often taunts and torments on people's misfortune and enjoys picking on whoever he deems weak. The character is based on the red demon from Japanese mythology.

Attack Potency: Planet level (Fought and is capable of hurting Cure Peace and Cure Sunny, both who were able to tank an attack from Emperor Pierrot)

Lifting Strength: At least Class K (Physically the strongest member of the Bad End Generals. Can lift over 100 tons, albeit with greater effort than Cure Sunny)

Weaknesses: Some of the abilities of the Akanbe he creates will occasionally back fire on him.

Bad End Alternate Reality: Using his Picture Book of Darkness, Akaoni smudges black paint over its pages and creates realm with a red sky and dark red clouds. Victims within the realm lose their will to live or perform any action and emit negative energy, which he collects for Emperor Pierrot. This ability also boosts the user's power and opponents in this realm are trapped and can only escape by defeating the user.

Akanbe: Akaoni will bring out a ball called Nose and uses it to create a monster called Akanbe (Buffoon in English translations). The power and abilities of these monsters are determined by the color of the Noses and the nearby object he uses to create it. He can even fuse or manually control some of them.

Retrieved from "https://vsbattles.fandom.com/wiki/Akaoni?oldid=4106088"
Community content is available under CC-BY-SA unless otherwise noted.