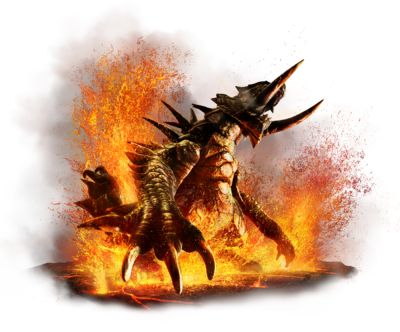 A massive Flying Wyvern listed by the guild as being equal to, if not more powerful than some of the Elder Dragons. Akantor is considered one of the most powerful non-Elder Dragon monsters, once it was even going to be classified as an Elder Dragon. Despite being classified as a Flying Wyvern, this creature cannot fly and is only listed as such due to having structural similarities to Tigrex.

Same as before, plus Explosion Manipulation (Capable of causing powerful explosions when it digs into the ground which burst into large spirals of lava)

Stamina: Limitless (No matter for how long it's fought, it will not get tired just like Elder Dragons)

Range: Extended melee range to tens of meters with physical attacks due to sheer size. Tens of meters, likely higher with ranged attacks (Was capable of shooting an airship out of the sky with one of its attacks)

Feats: Can stand up to non-elder dragons with little to no effort

HC Akantor
Add a photo to this gallery

Retrieved from "https://vsbattles.fandom.com/wiki/Akantor?oldid=6628353"
Community content is available under CC-BY-SA unless otherwise noted.