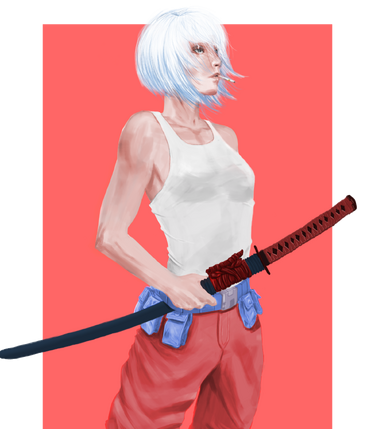 Akane Sugahara was a young girl who came to a man named Ishikawa's dojo to train. She trained there for years until she mastered the art of combat. Not much is known about her other than she is at war with the Yakuza and is the nemesis of a cyborg samurai named Katsuro.

Powers and Abilities: Superhuman Physical Characteristics, Statistics Amplification (Via equipment), Weapon Mastery, Martial Arts, and she can build up and store her adrenaline for super attacks,

Attack Potency: Wall level (Can bisect enemies at any angle in a single strike with her katana, even as a child; can cut through cyborgs and bullets)

Speed: At least Peak Human normally (Much faster than the Yakuza soldiers) with Supersonic reactions (Can deflect multiple bullets at any range), higher with her dash. Up to Supersonic with Dragon Slash and Slayer (Moves faster than bullets, imperceptible to the human eye with these attacks)

Durability: At most Street level (Dies from katana slashes and bullets)

Stamina: High (Can fight a hundred Yakuza soldiers alone, but she can be tired out eventually)

Range: Standard melee range to several meters with her revolver,

Standard Equipment: Her katanas and revolvers (more than 6 shots), several gauntlets, boots, bracelets and cigarettes that can enhance her physical abilities

Intelligence: At least Above Average (Has been training in the art of fighting all of her life)

Retrieved from "https://vsbattles.fandom.com/wiki/Akane_Sugahara?oldid=6600457"
Community content is available under CC-BY-SA unless otherwise noted.