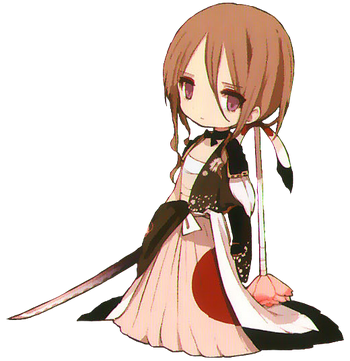 Akane Fuwa is a magical girl in Arc 2. Once a levelheaded, compettitive and very responsible girl who enjoyed having kendo duels and proud to be a magical girl, she later developed severe PTSD after her entire family was murdered in front of her by Cranberry. The event was so traumatizing she's since been unable to think clearly and gotten severe speech problems, only able to say a few words at a time in broken sentences. Obsessed in finding her for revenge, she became extremely violent in her methods, attacking every magical girl she met to see whether she was Cranberry or not. In her very poor state of mind, her fighting style is aggressive, violent and ruthless, and she'll show no hesitation or remorse in killing others. Her magical girl name is Akane. During the events of Restart, she isn't part of any team, instead acting solo.

Powers and Abilities: Superhuman Physical Characteristics, Enhanced Senses (Comparable to Snow White), Expert Swordsmanship, Durability Negation, Regeneration (Mid-Low to High-Low Regeneration; Can heal deep wounds, broken bones and broken teeth; most wounds will usually be healed after de-transforming), Self-Sustenance (Types 2 and 3), Resistance to Air Manipulation (no matter where or how fast she moves or fights, she won't be hindered or slowed by air resistance) and Poison Manipulation/Disease Manipulation (their bodies automatically reject their effects)

Attack Potency: Multi-City Block level (Scales to @Meow-Meow and Magical Daisy. When she went on a rampage, characters like Clantail, Rionetta, and Melville ran from her). Her magic ignores durability conventions

Speed: At least Hypersonic+ (Even a weak magical girl can run 2 kilometers in the blink of an eye)

Intelligence: Extremely low after her PTSD. However, she remains one of the most skilled magical girls in combat, capable of holding her own against Magical Daisy.

Weaknesses: None of the regular human weaknesses. If she becomes unconscious, she turns back into human and loses all the magical girl advantages.

Slicing: Akane’s magic is to cut anything in her line of sight, regardless of distance, with barely any lag. Her slices are able to cut through anything, including light, as long as Akane can clearly see the target, and they happen nearly at the same time she swings her sword. For her magic to activate, she must first perform a full swing from one side to another, and the cut will happen only on the first thing it hits. The slices can thus be blocked by throwing an obstacle right as she attacks. As the cut will happen solely on what she's looking at during her sword swing, she can thus completely bypass barriers, forcefields, light and water, as long as she can see her target directly.

Retrieved from "https://vsbattles.fandom.com/wiki/Akane_(MGRP)?oldid=5535429"
Community content is available under CC-BY-SA unless otherwise noted.