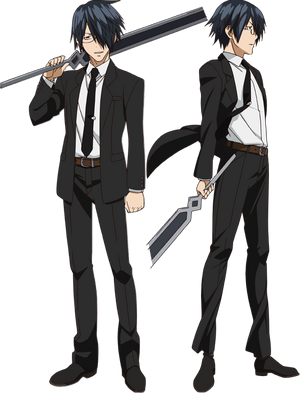 Akane☆Hoshi is one of the major supporting characters in Soul Eater NOT!. He is a part of Death Weapon Meister Academy's CIA branch and one of the top contending EAT Class members who transferred into the NOT Class along with his weapon partner, Clay Sizemore, to keep a close eye on Princess Anastasia on request from her family and to protect her should danger befall her. He is also of the Hoshi, a family that own a dojo that was the offshoot of the Star Clan and as a result, is a relative to Black☆Star. In Soul Eater, he later appears as part of the final operation of fighting off the Clown Army and stopping Kishin Asura.

Attack Potency: Multi-City Block level (Can hold his own against White Rabbit and was considered one of the top EAT Class students. Can be comparable to Black☆Star early in the series, having already been proficient with a technique more advanced than the former's Soul Wavelength-related attacks at that time)

Speed: At least High Hypersonic (Was capable of outpacing a swing from White Rabbit intending to destroy one of Eibon's tools, much to his surprise)

Stamina: Extensive; Was able to fend off traitors and later go against White Rabbit despite the latter being more powerful.

Intelligence: Skilled combatant (trained in various martial arts) and skilled in espionage and analysis (his soul perception can sense an invisible Asura and calculate by meters).

Weaknesses: Powerful individuals (like Shaula Gorgon) can cancel out his Soul Menace technique with their own strength and durability.

Note: This covers the manga version of the character.

Retrieved from "https://vsbattles.fandom.com/wiki/Akane☆Hoshi?oldid=4106085"
Community content is available under CC-BY-SA unless otherwise noted.