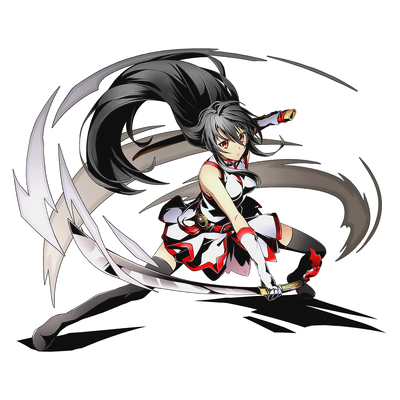 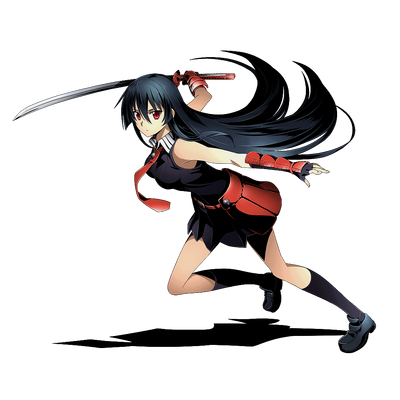 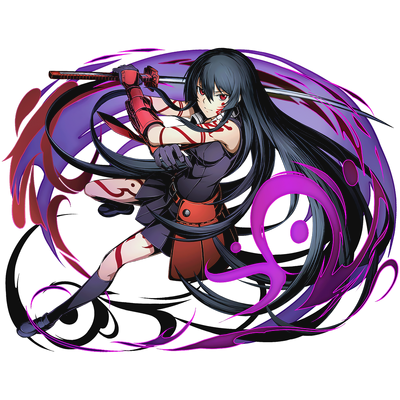 Akame is an infamous member of Night Raid, the assassination team of the Revolutionary Army. Her use of the Teigu Murasame, a weapon able to kill any living being with a single cut, has earned her the epithet "Akame of the Demon Sword Murasame" among her foes. Once an orphan trained to carry out the Empire's dirty work, she now seeks to undermine the corrupt kingdom she helped build with her nearly unrivaled skill with a blade.

Powers and Abilities: Superhuman Physical Characteristics, Master Swordswoman, Master Hand-to-Hand Combatant, Stealth Mastery, Regeneration Negation (Mid-Low) with Kiriichimonji, Limited Resistance to Poison (She developed resistance to moderate amounts of toxins as part of her training as an elite assassin) | Same as before excluding Regeneration Negation, Aura Suppression, Resistance to Telepathy (Can "clear her mind", hiding her thoughts from Zanku, who is able to read one's mind), Poison Manipulation with Murasame (Can kill living things, even those resistant to toxins in a matter of seconds with even a minor wound)

Attack Potency: Likely Large Building level (Can defeat Danger Beasts that are this large. Defeated Mera, who fought on par with Gozuki. Shouldn't be weaker than Tatsumi, who killed a Danger Beast capable of this at the beginning of the series) | At least Large Building level, likely higher (Much stronger than before, and defeated Pre-Incursio Tatsumi with ease. Can casually kill Evil Birds who Base Incursio Tatsumi had a hard time defeating) | Likely Small City level (Somewhat stronger than Mine and Seryu, the latter managing to withstand a shot from Pumpkin in danger. Nearly comparable to Leone, and can harm people comparable to her) | Small City level+ (Almost comparable to EoS Leone. Capable of fighting against Budo, managed to trade blows with a bloodlusted Wave, as well as managing to fight with Esdeath at times. After taking performance enhancing drugs, she was able to cut ISCIC amped Esdeath's arm with a sneak attack) | At least Country level, likely higher (Almost comparable to a fully serious Ice-Storm amplified Esdeath, and managed to kill her in the end)

Speed: Supersonic+ (Was able to effortlessly keep up with Taeko, who should be faster than an assassination target who easily evaded a bullet) | At least Supersonic+ (Faster than before. Struck Tatsumi before he had a chance to react, and effortlessly blitzed three fodders) | Hypersonic+ (Comparable in speed to Leone who managed to evade the self-destruction of Bols' Teigu) | Massively Hypersonic (Evaded a surprise lightning bolt without much trouble. Can keep up with Wave and a casual Esdeath) | At least Massively Hypersonic (Kept up with a fully serious Esdeath)

Durability: Likely Large Building level (Can take hits from the likes of Mera, and Danger Beasts of this size) | At least Large Building level, likely higher (More durable than Pre-Incursio Tatsumi. Took attacks from Zanku who overpowered the former) | Likely Small City level (Nearly comparable to Leone in durability, who withstood an unknown amount of energy from Bols' self-destruction. Much stronger than Seryu who withstood a shot from Mine's Pumpkin) | Small City level+ (Tanked a blast and punch from an angry Budo with only moderate damage. Managed to take direct hits from a bloodlusted Wave, getting up shortly after. Able to survive attacks from a semi-serious Esdeath) | At least Country level, likely higher (Took a hit from a serious Esdeath)

Intelligence: High. Considered worthy enough to be apart of the Elite 7 Assassin squad. Akame is a skilled swordswoman, and Assassin. She is considered one of the best members of Night Raid, her skill with a blade even being recognized by Esdeath herself.

Weaknesses: Murasame needs to cut the actual flesh of her opponent in order to apply its effect. This ability only works on organic beings that have a heart, rendering it ineffective against Armor and Biological type Teigu as well as machines, puppets, and dead things. | She tires out faster in Ennoodzuno form

Minor Pre-Cog: Characters in the Akame ga Kill Universe have a minor Pre-Cog ability that alerts them to the presence of nearby danger or murderous intent coming from an attacker.

Note: Kiriichimonji only negates regeneration on a Mid-Low scale.

Note 2: While Akame was paralyzed by Budo's electricity, this was more due to the nature of electricity paralyzing the muscles. The fact is she withstood the energy output overall.