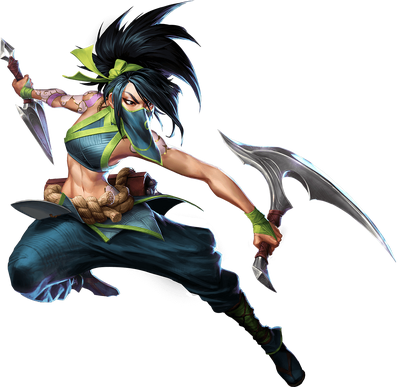 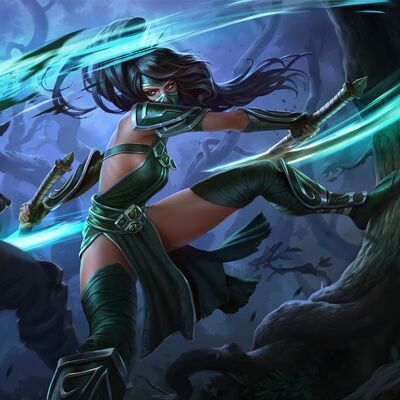 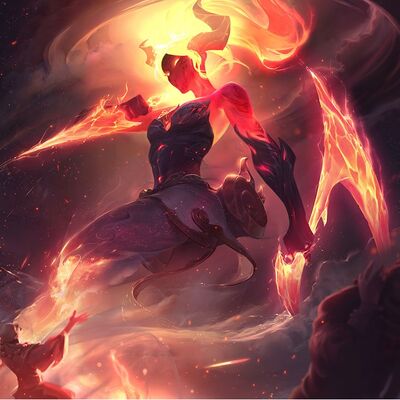 Abandoning the Kinkou Order and her title of the Fist of Shadow, Akali now strikes alone, ready to be the deadly weapon her people need. Though she holds onto all she learned from her master Shen, she has pledged to defend Ionia from its enemies, one kill at a time. Akali may strike in silence, but her message will be heard loud and clear: fear the assassin with no master.

A djinn summoned from the world below, the Infernal known as Akali will burn her patron’s enemies to cinders… though the cost for such service is always dire.

Attack Potency: Small Town level+ (Comparable to Shen and Kennen) | Mountain level (This strong by virtue of sheer size, Comparable to Volcanic Wukong and Firefang Warwick. When the Ashen Lord was first summoned, the Infernals ripped great mountains from their foundations.)

Speed: Subsonic reactions and combat speed (Was personally trained by both Shen and Kennen and is consistently able to keep up with them. Able to fight at speeds comparable to Irelia, Karma, and Yasuo.) | Hypersonic+ (Able to move this fast)

Intelligence: High (Akali is a highly proficient assassin, having been trained to kill since the moment she was able to walk. Having been personally trained to use shurikens by Kennen, personally trained in the ninja arts, stealth, and subterfuge by Shen, as well as developing her own fighting style of emphasizing speed and agility over strength and becoming a master of the kama and kunai. Her skill is so great that she succeeded her mother as the Fist of Shadow when she was only a teenager, and despite not possessing any innate supernatural abilities like Shen and Kennen she was considered just as deadly as them.)

Retrieved from "https://vsbattles.fandom.com/wiki/Akali?oldid=6581960"
Community content is available under CC-BY-SA unless otherwise noted.