VS Battles Wiki
Register
Don't have an account?
Sign In
Advertisement
in: Tier 9, Tier 9-B, Tier 7,
and 41 more 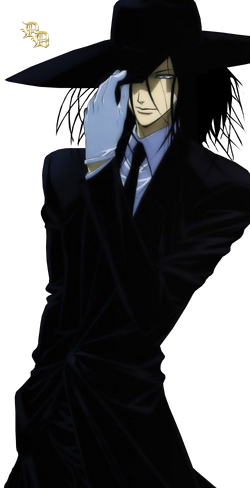 Kuroudo Akabane is part of the main cast and one of the major antagonists of the GetBackers series. He works as a transporter and the only reason he does so is that he wants to find "fun" jobs where he gets to fight and kill strong people like Ban and Ginji.

Powers and Abilities: Superhuman Physical Characteristics, Immortality (Type 1, 3, 4, 5, 8; Transcendental being are stated to exist even beyond death itself, he is unable to die as long as he doesn't imagine it.), Regeneration (Low-High; Regenerated after Ban reduced him to a drop of blood in their final fight), Resurrection (Via Divine Providence), Weapon Creation (Can create weapons out of his own blood, moreover he has stated that anything that mixes with his blood will become his weapon), Weapon Mastery (Knives, Sword, Spear. Can create an absurd amount of knives in his blood), Telekinesis, Homing Attack (Can Telekinetically Control his Weapons and can make them fly, chase, and attack any Target), Durability Negation, Reality Warping, Power Nullification, Probability Manipulation and Law Manipulation With Divine Providence (As long as he can't imagine something it cannot materialize. This gives Akabane Immortality, the ability to Nullify Powers and the inability to lose, though not to the extent of Ban Midou. His powers work on the same principles as Quantum Uncertainty where Wave Function Collapse determines the Reality and as such, if he doesn't believe in something then it won't exist and if he does, then the possibility of it would definitely happen), Soul Manipulation (Paul stated that merely being in the presence of Akabane made him feel like his soul was being yanked out), Precognition (Kagenuma stated that Akabane had likely seen the outcome of the fight between him and Ban) Reactive Evolution, Matter Manipulation (Could turn Diamond Dust into Scalpels), Power Modification (Can remove parts from powers such as when he made Masaki's indestructible light beams, destructible because he couldn't imagine that there was something he couldn't destroy), Darkness Manipulation (Can attack by manipulating his own shadows and creating darkness), Non-Physical Interaction (Can Interact with Non-Physical Beings including Immortal Soulless Beltline Monsters who are Non-Existent), Dimensional Travel and Spatial Manipulation (His sword is capable ot slicing through space and dimensions), Duplication (Can spawn clones of himself with almost 100% of his true power which effortlessly beat Kagami's clones), Power Mimicry (Copied Kagami's duplication skill after seeing Kagami do it once), Blood Manipulation (Can create weapons from his blood), Enhanced Senses, Extrasensory Perception, Information Manipulation and Negation (Works on the Principal that no matter what, the Low cannot stand against the High. A powerful Logic user like Akabane can create Logic to overpower the Logic of Reality, this applies to Magic as well as not even it can escape Logic. Akabane is capable of Nullifying Powers, Immortality and even unique traits), Existence Erasure (Can Erase Beings on a Metaphysical Level), Life Manipulation (Suspended the Life Force of Ban so that he won't be erased at all), possibly Fate Manipulation (What people imagine most determines their fate), Creation (Using Hojutsu one can create Soulless or even Non-Existent beings which use a powerful Logic as a Soul), Time Manipulation, Spatial Manipulation via being Transcendental (Transcendental beings are beings who have "transcended time and space" and as such, they can easily manipulate it. They can reverse the time flow on themselves to get younger or older at will, distort space, cut space or dimensions, and more. Furthermore by being transcendential they are dislocated from the current time, instead existing in a different "time frame", seemigly giving an effect as if they exist a bit in the future), Resistance to Radiation Manipulation (Casually held a mass of Active Uranium in his hand without even being affected in the Slightest), Poison Manipulation, Paralysis Inducement (Was unaffected by the poisonous smoke from Shikabane leaves in Infinity Fortress), Heat and Blood Manipulation (Wasn't bothered at all by Raitei's passive Aura), Illusion Creation, Mind Manipulation (Could see through Makubex' Virtual Reality), Soul Manipulation (Fought and won against Raitei at full power), Data Manipulation, Spatial Manipulation, Time Manipulation, Fate Manipulation, Information Manipulation, Law Manipulation, Magic, Physics and Metaphysics Manipulation, Soul Manipulation, Causality Manipulation, Dream Manipulation, Perception Manipulation, Memory Manipulation, Void Manipulation, BFR, Teleportation, Probability Manipulation, Biological Manipulation, Matter Manipulation, Quantum Manipulation, Empathic Manipulation, Conceptual Manipulation (Type 1), Life Manipulation, Death Manipulation, Absorption and everything The Archiver can do (Being a special type of Transcendental whose willpower and true self exists in the Real World like Professor Makube, he is Immune to anything The Archiver can do while existing in the GetBackers Universe even though The Archiver could affect Transcendentals like Kagami and Masaki in the GetBackers Universe), Statistics Reduction (Could engage in battles and defeat the likes of Ban inside the Beltline, which drains someone of their stamina)

Attack Potency: At least Wall level (Capable of cleanly slicing skulls, limbs and fighting against early series Ban Midou) | At least Large Mountain level (Fought on par with Ban Midou, superior to Ginji who could block this with 1 hand) | At least Large Country level, likely Continent level (Was overpowering Ban Midou at the beginning of their match. Paul Wan and Maria Noches, who were watching, had trouble following the fight, something that was not happening during the fight between The Voodoo King and Ginji Amano)

Speed: Likely FTL (He is far superior to the Drei Rihter in terms of speed, even Paul and a Limits Surpassed Ban were having trouble following his movements), possibly far higher (Was superior to Angel Arm Ban Midou, before the latter got progressively faster) | FTL | FTL

Stamina: Unknown (Never shows any signs of being tired even when inside the Beltline which drains people of their stamina)

Standard Equipment: Scalpels, Blood Sword and Bloody Lance (All of which he makes out of his own blood)

Intelligence: Extraordinary Genius (As a fighter he was named Ban's equal, academically he is 1 of the best scientists in the whole world who helped create the virtual world and the archiver, a complex system capable of self-development)