VS Battles Wiki
Register
Don't have an account?
Sign In
Advertisement
in: Tier 1, Tier High 1-B, Tier Low 1-A,
and 57 more 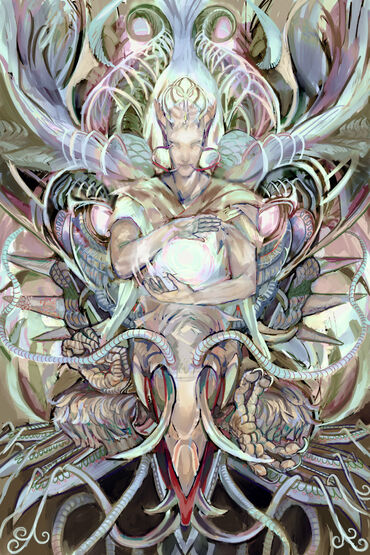 Aka is the Dragon God of Time and the King of the Et'Ada. He is the Soul of Anui-El and the opposite counterpart to the Missing God of Change, Lorkhan, the Soul of Sithis. Their simultaneous birth gave shape to the primordial chaos, and was what allowed the Et'Ada to crystallize and erupt from ineffability into being. So that order could be brought into the cacophony that was Existence, Aka mutilated himself, shattering his spirit into countless fragments and "bleeding" into the Aurbis as the concept of Time which he now embodied. As a result of this sacrifice, Aka's became divided into various shards of itself, making it so that his spirit was no longer that of a unitary Et'Ada, but of a multitude of aspects. Henceforth and forever after, Aka was also known as the Cyrodilic Akatosh, also known as the Altmeri Auri-El, also known as the Khajiiti Alkosh, also known as the Nordic Alduin, and also known as countless other names.

Much like his mirror-brother Lorkhan, Aka too came to the realization that Existence was nothing but the Dream of an uncaring Godhead and that he, like all other souls, was trapped within a Prison of endless suffering. However, unlike Lorkhan, who through the creation of the Mortal Plane attempted to find a way for the spirits to transcend all boundaries and bring an end to the Dream, Aka denied the truth of his discovery and sought to propagate the Dream he was locked within. Motivated by a fear of his condition as a nonexistent idea within the mind of God, Aka egotistically proclaimed his own individuality, affirming himself as an existent being despite his own undeniable epiphany. In doing so, Aka's mind broke, driving him completely mad and in the process inadvertently trapping all souls within the self-fulfilling cyclical flow of Time.

When Aka (Now in his fragmented aspect of Auri-El) was made aware of Lorkhan's true intentions in creating the Mundus, he called all of the Et'Ada to a Convention outside Aurbic Time wherein they would determine Lorkhan's punishment and the Laws that would henceforth govern the mortal plane. To do so, Auri-El cast his vessel down from the heavens, having it fall to earth as a spike that would bind the whole of Mundus to the Laws of Convention. This was the creation of Ada-Mantia, the Ur-Tower and the focal point of the Aurbis. With the Laws of Convention firmly set in Stone and Lorkhan's execution rightly delivered, Auri-El (Or Akatosh) established himself as the King of the Gods, ruling from Heaven over both mortals and immortals through his unbreakable, Adamantine laws. Chief amongst these was the concept of Linear Time, which forces mortal existence to progress ever-forward from past to future with no chance of alteration, and the Kalpic Cycle, which binds Nirn to a never-ending cycle of Life & Death, with the world itself being destroyed and remade at the end of every Kalpa.

Name: Aka (Or Akha), the Dragon God of Time. Known by many names, such as Akatosh, Auri-El, Alkosh, Alduin, Alkhan, Ald Son of Ald, Ruptuga, AKHAT, the Aka-tusk, and Tosh Raka. Called Bormahu ("Father") in the Dragon Tongue.

Age: Inapplicable. Created, and exists as, the concept of time.

Abstract Existence (Type 1. Gods are described as "manifest metaphors"[1] and their actions as "ideologies given skin,"[2] existing as aspects of the Aurbis that each personify a specific concept,[3] existing not as mere beings, but as the ideas themselves[4]), Magic, Avatar Creation, Cosmic Awareness, Creation, Reality Warping, Higher-Dimensional Manipulation, Life and Death Manipulation, Conceptual Manipulation (Type 1. Immensely above minor gods such as the Ideal Masters, who are stated to live in a platonic ideal of their own making beyond the Mundus.[5] Instantiated the eternal, timeless ideal of Primehome into reality, making it real for temporal beings[6]), Time Manipulation (Personifies and sustains time across the entirety of the Mundus, existing as both the weaver of its tapestry and the threads comprising it simultaneously[7]), Immortality (Types 1, 2, 3, 5 and 9. Gods are unbound by the concepts of Life and Death, which came to be during the creation of the Mundus and only applies to mortals,[8] and even incomplete deities such as Vivec can resurrect themselves at will from the timeless world of the gods[9]), Sealing and Forcefield Creation (His avatar single-handedly remade the barriers between Mundus and Oblivion, which had been previously broken by Mehrunes Dagon's interference), Invulnerability (Described as embodying the qualities of eternal endurance and invincibility[8]), Power Bestowal, Law Manipulation, Physics Manipulation, Omnipresence, Nigh-Omniscience, Causality Manipulation (The Divines are stated to be capable of modifying both the past and the future at their leisure[10]), Soul Manipulation, Large Size (Type 10), Sound Manipulation and Information Manipulation (The entirety of the Aurbis is, in fact, a song,[11] and entities with divine power are capable of manipulating the underlying tones of existence by acknowledging that principle, shaping reality through the manipulation of stories and archetypes,[12] making myth[13] and metaphor[14] manifest)

All previous powers and abilities on an immensely greater scale, as well as Acausality (Type 5. Aka personifies a fractured, non-linear concept of time in which all events are always happening simultaneously in spite of contradictions,[9][6] with phenomena participating in it being as such unbound by cause, duration, consequence and eventuality,[15][16] and the very lives of the Gods being described as unable to support most of the qualities of a narrative due to that.[1] Can access fully static states of existence outside of Aurbic Time, in which all of his actions occur eternally and continuously, even when, from a linear perspective, they are already long accomplished[17]), Existence Erasure (The Et'Ada are stated to be capable of submitting othe spirits to "sithite erasure."[17]), greatly enhanced Law Manipulation and Physics Manipulation (The Convention of the Et'Ada eternally defines and shapes the laws and nature of the mortal plane from outside of time,[18][17] and ensures Lorkhan is left bound in place, unable to return from death as Gods do[19]), Large Size (Type 11)

All previous abilities to unfathomably greater degrees, as well as Transduality (Type 3) and Beyond-Dimensional Existence (Type 2)

Attack Potency: High Hyperverse level (The Avatar of Akatosh was manifested through the shattering of the Amulet of Kings and the release of the divine power contained therein, the whole of which was previously shown as enough to empower The Vestige in such a way that it allowed them to single-handedly defeat Molag Bal. Repaired the barriers between Mundus and Oblivion, reinforcing them so that they stood stronger than ever before, and separating the two realms for eternity) | High Hyperverse level (As the God in the flesh, Akatosh is vastly superior to both his avatar and the Amulet of Kings itself, the latter of which is alleged to have been created when Akatosh drew a small amount of blood from his own heart as part of a convenant with mankind.[20] Considered the King of the Gods, and as such is considerably more powerful than the other Divines) | Low Outerverse level (Personifies the fundamental concept of time that permeates the entirety of the Aurbic World-Egg,[21] and which allowed the other Et'Ada to erupt into being and form their own identities[22][23][8] encompassing everything up to the Aetherius that encompasses[24] and exists in a "more real" state compared to the Mundus and the infinitely-dimensioned void of Oblivion.[25] The twin and mirror-brother of Lorkhan,[26][21]) | High Outerverse level (In their original states, the Et'Ada were entities that partook in the primordial interplay between Anu and Padomay, existing as sparks of divinity directly descended from their first interaction, before everything else came to existence, and being the primal state of being which Ruling Kings of the Aurbis return to through their attainment of CHIM[27])

Speed: Immeasurable | Omnipresent within the Mundus | Omnipresent (Described as personifying time across the entirety of the Aurbis[21][22]) | Irrelevant

Range: Low Complex Multiversal (Reforged the barriers between Mundus and Oblivion) | Same as before | High Outerversal (Equal to Lorkhan and other Et'Ada, who are attested as having been able to leave existence entirely and enter the Void of Sithis, beyond the egg-layered universe and the infinite wheels above it) | High Outerversal

Weaknesses: Much like the other Aedra, he exists bound to the Mundus | As a consequence of the very multifaceted and nonlinear nature of Time, Aka's mind is broken into numerous shards and he is rendered completely insane.

The Avatar of Akatosh, as seen in Oblivion

A stained glass depiction of Akatosh

Another stained glass depiction of Akatosh

A statue of Akatosh

Statue of Akatosh denoting the cyclical nature of Time

A statue of Auri-El in Skyrim

A statue of Auri-El in Summerset

A depiction of Akatosh 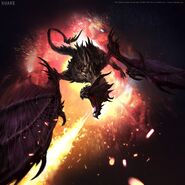 A depiction of Alduin