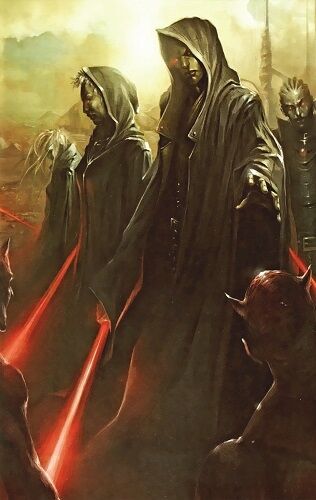 Ajunta Pall was a male Human Jedi Master and the leader of the Dark Jedi that were exiled from the Jedi Order and the Galactic Republic following the Hundred-Year Darkness. Upon his arrival on Korriban, he became the first Dark Lord of the Sith.

Attack Potency: Planet level (Killed over a dozen Jedi, who should be at the very least comparable to Yarael Poof, during the battle of Corbos. As the Dark Lord of the sith he should be more powerful than other Sith Lords of the time, such as Karness Muur, Remulus Dreypa, and Sorzus Syn. Even thousands of years after his death his spirit remained so powerful that Bastila Shan was wary of Revan encountering it, and Pre-Ritual Vitiate outright feared it as a threat to his power.)

Speed: Relativistic, FTL Reactions and Combat Speed augmented by Precognition (Was able to keep up with other Jedi, should be comparable to other Sith Lords of his time period.)

Intelligence: Gifted (Pall is a highly skilled combatant, having attained the rank of Master during his time in the Jedi Order, later going on to act as the General of the Exiles during the Hundred-Year Darkness and personally outmatching over a dozen Jedi simultaneously in one battle. He then went on to continue training until he became so skilled that he was acknowledged by Darth Traya as a virtual master of combat, and that compared to him, her skill in combat is likened to a child playing with toys. He is also a veritable genius in regards to the arcane and alchemical arts, having studied and practiced the art of Sith Alchemy for years before his exile and then draining the knowlege of Sith Sorcery and Alchemy from the entire race of Sith on Korriban to add to his own. He is widely acknowledged to be one of the Ancient Sith Lords who mastered and perfected the art Sith Alchemy.)