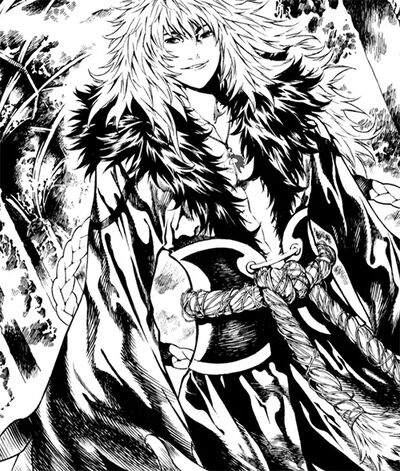 Aji Tae is the central antagonist of Shin Angyo Onshi. He is a black-winged demon who was responsible for Jushin's destruction, alongside many other mishaps throughout the series. Leading a band of supernatural fighters, heroes from the past, demons, and powerful black magic practitioners from the western country Pretinica, he aims to conquer the known land and reshape it to his own bidding.

A former scholar from Jushin and the man Munsu holds responsible for the destruction of the country. Many of Munsu's former allies and comrades have since switched their loyalties to Aji Tae, having been coerced by his power or duped by his charisma. His motives and purpose remain unknown. He possesses an extensive range of magical abilities, among them the ability to resurrect the dead, explode people with a mere glance, shapeshifting, and teleportation.

During the Junshin period, Aji Tae was General Munsu's second-in-command. At that time, he was smaller in size and sported short black hair and glasses. Despite his innocent exterior, however, Aji Tae was already convinced of the unworthiness of humanity and was already plotting his conquest of Jushin.

Powers and Abilities: Superhuman Physical Characteristics, Telepathy, Teleportation, Telekinesis, Can create illusions, Electrical Attacks, Sensory perception, Body Control, Necromancy (Characters who are affected by this ability are given Immortality [Type 7]), Can make someone explode just by looking at them and produce massive explosions capable of destroying a city with the blink of an eye, Transmutation (Can turn people into demons that can explode), Mind Manipulation (Can read people's minds and manipulate them), Absorption (He ate humans and even similar demons to grow stronger and smarter), Curse Manipulation (The contract between demon and human is a form of curse)

Weaknesses: Aji Tae feared Munsu because there is a slight possibility of Aji Tae (when he was only just a restrained demon) granted Munsu's wish rather than Hae Mo Su's because Munsu wished that Hae Mo Su would become king too, thus if Munsu dies, there is a chance Aji Tae will perish as well due to the contract isn't fully "complete". Aji Tae has to focus to use his power, and he's vulnerable to an ambush. His kind can't survive a decapitation. He has a duck pet that he really cares for, and won't cause any harm to who has ever helped his duck.

Retrieved from "https://vsbattles.fandom.com/wiki/Aji_Tae?oldid=5341828"
Community content is available under CC-BY-SA unless otherwise noted.