VS Battles Wiki
Register
Don't have an account?
Sign In
in: Characters, Fairy Tail, Sand Users,
and 13 more 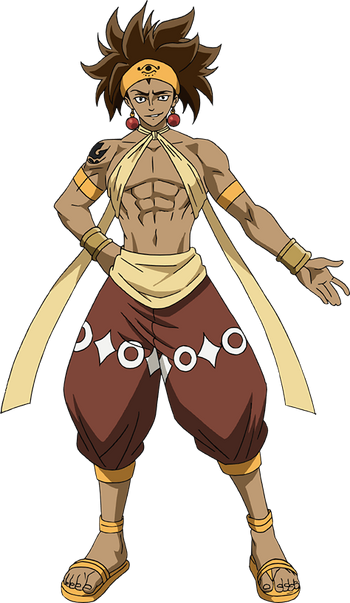 Ajeel Ramal is a member of the Spriggan 12 and part of the Alvarez Empire under the command of Emperor Spriggan. Ajeel is a very informal young man, not bothering to address those of higher positions with a respectful tone or its preferred, accompanying language; he also appears to be quite battle-happy, as at the mere mention of a war taking place between Ishgar and Alvarez, he became extremely giddy.

Speed: Relativistic (Kept up with Base Erza)

Lifting Strength: At least Class G (Comparable to Base Natsu)

Intelligence: Above average (Skilled in magic and combat)

Weaknesses: His sand body can be wounded by Water Magic and his sand can be blown away by Wind Magic. He is very overconfident during fights.

Sand Magic: Ajeel is an immensely potent user of Sand Magic, both offensively and defensively; so much so that he has been given the epithet "Desert King." He can mold sand into sandstone of various shapes similar to Dynamic Ice-Make, and can even turn into sand himself. He seems to have a special connection with sand, seeing as he was able to determine Makarov and his comrades' location by simply "asking" the land. He can near-instantaneously turn any inanimate object into sand on touch, rendering him immune to most armed assaults. In addition, when coming into direct physical contact with living beings, Ajeel can utilize this Magic to suck the moisture from one's body dry, draining the victim's energy in the process.