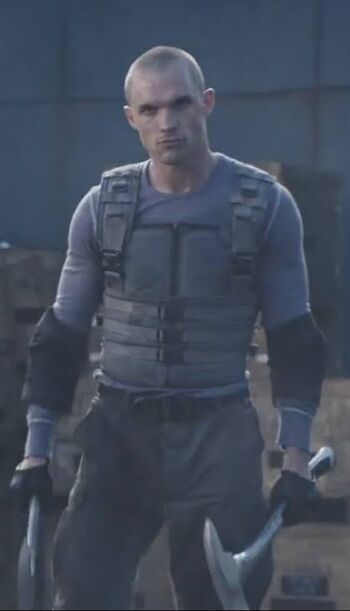 Ajax (born Francis Freeman) was a human who gained immunity to pain and enhanced reflexes from an augmentation procedure given to him by The Workshop. He is the main anatgonist of Deadpool, where the titular character seeks revenge against him for leaving him in a deformed state.

Lifting Strength: Class 5 (Can bend rebar with his bare hands. Also snapped Deadpool's katana in half. Able to easily lift grown men above his head with one hand and no visible effort and throw a full grown woman several feet away with brute force)

Intelligence: Likely Gifted (Being the head of the mutate-developing project, Ajax apparently had extensive knowledge of mutant biology, able to quickly determine the nature of an individuals newly developed powers)

Weaknesses: Can be instantly killed by puncturing his brain. Cannot heal from the damage sustained during battle on his own. Is angered if called by his real name.

Retrieved from "https://vsbattles.fandom.com/wiki/Ajax_(X-Men_Film_Series)?oldid=6544214"
Community content is available under CC-BY-SA unless otherwise noted.