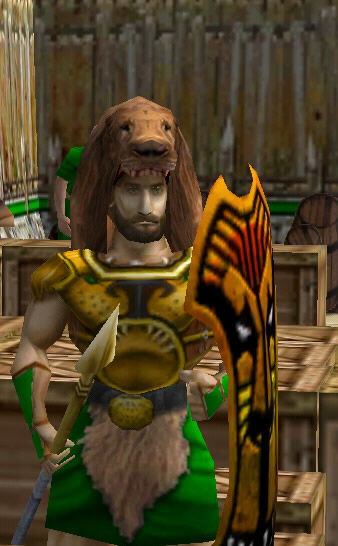 Ajax is the sarcastically quipping, anger issue-laden Prince of Salamis, and one of the main characters in the 2002 real-time strategy game Age of Mythology. In the Fall of the Trident campaign, he is one of the Greek warriors sieging Troy aided by Arkantos, with them implied to already know each-other, forming a strong friendship that would last throughout their journey, which would span multiple continents in an attempt to stop the evil Cyclops Gargarensis from setting the Titans free from Tartarus.

Ajax returns in the expansion scenario, the New Atlantis, now ten years older and reigning as King of Salamis. He is notified of Kastor's, Arkantos' son's, and the Atlantean's endeavors to attack the Greeks, and their Norse and Egyptian allies. Deciding to put a little sense in the young warrior's mind, even forcibly, he discovers through his old friend Amanra, now Queen of Nubia, that Kastor has been tricked by the Servant of Kronos to release the Titans. Now on a time limit, Ajax and the others hurriedly dispatch the lesser Titans through various means, before finally sealing back Kronos himself into Tartarus with the help of Gaia.

Powers and Abilities: Superhuman Physical Characteristics, Skilled with his spear and shield

Attack Potency: At least Wall level (Can easily toss soldiers tens of meters into the air with just his Shield Bash and personally laments about pulling people's heads clean off. Is the same Ajax that partook in the Trojan War, who was the second strongest warrior the Greeks had, behind only Achiles)

Speed: At least Peak Human (Capable of keeping pace with other peaked soldiers), possibly Superhuman (Can keep pace with horses, although they trot more so than run and it could very well just be game mechanics)

Lifting Strength: At least Superhuman (Can toss fully grown men tens of meters into the air. Managed to lift a giant axe nearly as big as his own body to decapitate "Gargarensis")

Durability: At least Wall level (Should be at the very least comparable, if not superior, to Arkantos, who is implied to have survived multiple encounters with Kamos, a stronger demigod Minotaur that can achieve similar feats to him)

Stamina: Very high (Did not appear too tired after fighting off a Trojan patrol, helping in the building of the Great Wooden Horse, sneaking into Troy at night and razing the city to the ground, despite said events taking place in less than 24 hours)

Intelligence: Gifted in combat (A hardened and experienced warrior that was an important factor in the taking of Troy and the defeat of Gargarensis' armies), likely Average otherwise (Shown to be incredibly ignorant in most situations, such as assuming the Great Wooden Horse was meant for fighting, though this trait has been lessened 10 years later, as he is now also a king)

Weaknesses: Prone to bursts of anger. Doesn't think his actions through. Not very intellectually inclined.

Note: While Ajax does technically possess Resurrection and Regeneration, this is most likely just the way campaign Heroes work, as it would be extremely troublesome if they were permanently killable units in their respective scenarios.

Ajax in Fall of the Trident

Ajax in the New Atlantis
Add a photo to this gallery

Retrieved from "https://vsbattles.fandom.com/wiki/Ajax?oldid=6979591"
Community content is available under CC-BY-SA unless otherwise noted.