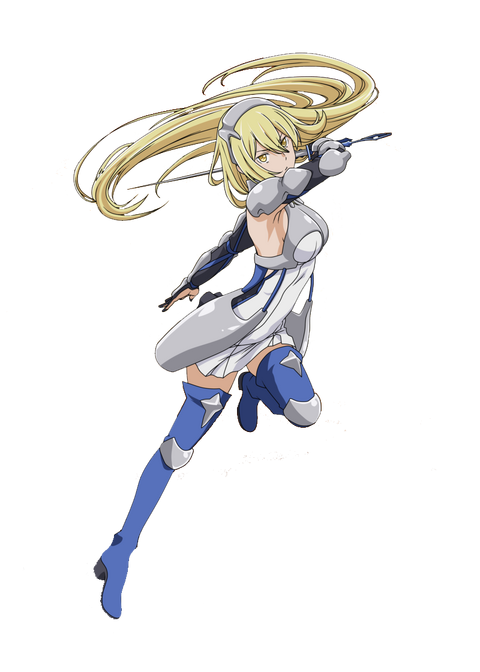 Arguably the most famous member of the Loki Familia, Aiz Wallenstein is the infamous Sword Princess, holding the record as the fastest Adventurer to ever reach Level 2, doing so at eight years old within a year, a record that went unbroken until the advent of Bell Cranel. Despite her combat prowess, she is constantly seeking to become stronger, and is interested in learning how Bell's strength is growing so rapidly, oblivious to the fact that she herself is the reason for his sudden rise in power.

Origin: Is It Wrong to Try to Pick Up Girls in a Dungeon?

Powers and Abilities: Superhuman Physical Characteristics, Air Manipulation, Master Swordswoman, Expert Hand-to-Hand Combatant, Pseudo-Flight (Can freely maneuver through the air by controlling wind currents), Resistance to Poison Manipulation and other Status Effects, Aiz's abilities are enhanced when fighting monsters she has slain before such as Minotaurs

Attack Potency: At least Large Building level (Defeated a monster this size as a Level 5, is now much stronger as a Level 6 Adventurer), Her unnamed skill ignores conventional durability

Lifting Strength: Superhuman (Can carry around large packs of magic stones without too much trouble)

Durability: At least Large Building level (Managed to survive a hit from Revis, who later went on to clash with Finn)

Stamina: High, regularly fights dozens of monsters without breaking a sweat and ran from the acid monsters the whole time all the way back to camp with no signs of exhaustion.

Range: Extended melee range with her sword, At least a dozen meters with Ariel

Standard Equipment: Desperate, a first-class longsword specifically crafted for Aiz with the Durandal attribute, which renders the weapon virtually indestructible, but it can still be dulled by sufficiently powerful attacks and potent acids.

Intelligence: Aiz is a swordswoman of the highest caliber in Orario, easily plowing through most monsters in her path, even in the depths of the Dungeon's lower floors. She fights with exceeding speed and grace, dazzling most onlookers, and seamlessly supplements her swordplay with hand-to-hand combat (which she taught to Bell) and her wind magic, Ariel. Her proficiency is so great that Finn trusts her to defeat the giant acid-monster single-handedly when hundreds of smaller and weaker versions could easily overrun the Loki Familia camp. However, she is insecure about her feelings and is reckless in her pursuit for strength, leading to mistakes and overzealous maneuvers when hard-pressed.

Weaknesses: Aiz is somewhat reckless in her bid to become stronger, and she has a tendency to use all-or-nothing attacks when sufficiently hard-pressed. Rarely uses her unnamed skill unless it's absolutely necessary.

Tempest: Ariel: Aiz's only spell, it allows her to generate powerful winds with every movement, surrounding herself in in howling gales. She is able to direct them to allow her to strike distant foes, further increase her already impressive speed, increasing the cutting power of her swings, and blowing away incoming impediments and projectiles. She has also used it to bolster her mobility, effectively granting her the ability to fly by controlling her own movements through the air with wind currents.

Retrieved from "https://vsbattles.fandom.com/wiki/Aiz_Wallenstein?oldid=6940231"
Community content is available under CC-BY-SA unless otherwise noted.