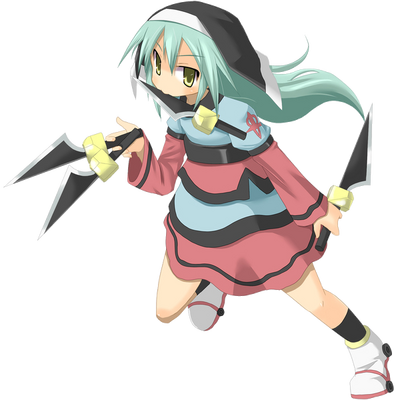 Aiwhen is a playable Character of Wonderful World. The youngest member of the country of Berga's Demon Hunting Forces "McCulley". Her father died of an illness attaining a sense of mind and Aiwhen doesn't have much memory of him. Her Mother and Sister were killed by a Demon, forcing a Grudge on Aiwhen. She doesn't know how to live by herself, rather than saying she's a Demon Hunter for the sake of the enemy, so it creates a clause that clears the resentment right away. She is dangerous and saw the threat as a Demon who slashed with no questions. She even carved up a squirrel who was trying to go home. Still, her power is growing and is always worried about Lynia. Aiwhen always avoids getting deeply in touch. She sees Knights and Bounty Hunters as incompetent, there is no particular reason for burning a sense of opposition beyond necessity, trying to become a younger opponent with a gangster, or being a sore loser and being childish. She admires well for adult women, but human males are still in question after her father's death.

Speed: Massively Hypersonic (Can go toe to toe with Chartette who can perform this feat)

Durability: Small Town level (According to this calc , Chartette's swing alone should be capable of this.)

Intelligence: High (As the Youngest Demon Hunter of McCulley, she killed her developing share of Demons, and is allies with Lynia; a high-ranking McCulley unit.)

Feats: Is currently the youngest Demon Hunter to have killed some kind of Demon. She also throws Daggers for practice, continuously increasing her ability. She is also capable of battles of attrition.

Retrieved from "https://vsbattles.fandom.com/wiki/Aiwhen_(Wonderful_World)?oldid=7026918"
Community content is available under CC-BY-SA unless otherwise noted.