VS Battles Wiki
Register
Don't have an account?
Sign In
Advertisement
in: Characters, Mega Man, Capcom,
and 14 more 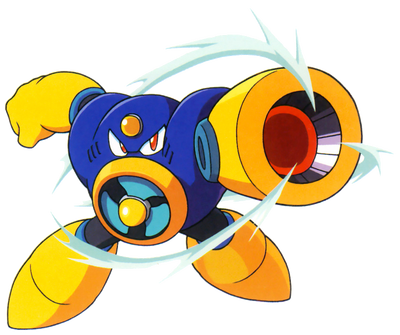 Air Man is a Robot Master created by Dr. Wily specifically for combat. Despite being a relatively good-natured robot, he is an egotist who believes in fulfilling the purpose he was built for and is an infamously difficult opponent for Mega Man.

Age: His body age is unknown, A.I. seems to be based on a teenager

Powers and Abilities: Superhuman Physical Characteristics, Self-Sustenance (Types 1, 2 and 3), Air Manipulation, Levitation, Size Manipulation (Can change the size of his blades to block attacks), Resistance to Time Stop (All Mega Man 2 Robot Masters have a device installed that allows them to resist Flash Man's Time Stopper) | Same, plus Flight

Attack Potency: At least Large Island level+, likely Large Planet level+ (Provided a very difficult challenge for Mega Man in battle) | Island level (Should be superior to his minions, who created a typhoon of this magnitude. Fought Mega Man and the other Light numbers, was able to last for a time against Duo)

Lifting Strength: Class T (As a combat-type Robot Master, he should not be much weaker than Mega Man) | Unknown

Stamina: Limitless due to being a Robot Master.

Intelligence: Air Man is something of an egotist who tends to bore his comrades with long-winded speeches about his own accomplishments. Nevertheless, he is a very capable combatant who is infamous for his difficulty as a video game boss, closing the distance while firing a close-range spread of powerful tornadoes to blast Mega Man backward and deflect opposing attacks to maintain his offensive.

Weaknesses: Air Man is egotistical and weak to leaf-based attacks as they clog his propeller. His tornadoes tend to spread out in a fan-like pattern, creating blind spots when used at longer ranges.