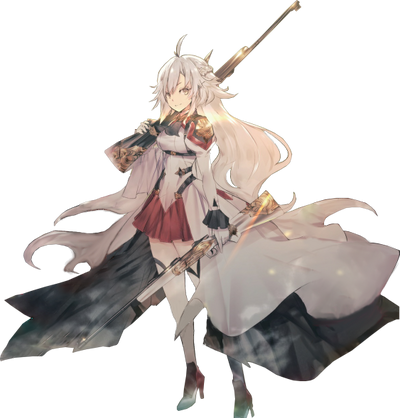 Air Arland Noah is a girl who introduced herself as a Ghost of Belial and is the creator of the silver bullet know as Devil Bullet.

Origin: May These Leaden Battlegrounds Leave no Trace: Bullet Magic and Ghost Programs

Attack Potency: Athletic Human level (Is a trained soldier and a mage making her be a peak human in performance), Wall level (Mages are stated to be comparable with a fixed cannon if they are let to focus their magic)

Speed: Athletic Human (Is a fit soldier and should be able to run at this speed), Supersonic reactions (Can dodge multiple bullets that move at supersonic speed)

Lifting Strength: Athletic Human level (Is a trained soldier and a mage making her be a peak human in performance)

Striking Strength: Athletic Human Class (Is a trained soldier and a mage making her be a peak human in performance)

Durability: Athletic Human level (Is a trained soldier and a mage making her be a peak human in performance) Stamina: Above Average, should be ably capable of exerting actions for prolonged periods of time thanks to being a fit and trained soldier.

Range: Normal melee, hundreds of meters with a gun as he can hit people 400 meters away

Standard Equipment: Gun, Two Rifles (One black and one white)

Intelligence: She has a haughty attitude that doesn't really fit her girlish appearance and also has a mean streak at the same time but actually she is just lonely after being jaded by numerous wars. Her skills with the Extelia are impeccable, making her look like a war hero who lived through countless battlefield thanks to her skill. She managed to overwhelm a losing battle against Alec Thanda with just her keen mind, and Qualia allowing her to create strategies to control the battlefield. A mage needs to calculate multiple factors, from information on the enemy to their surroundings, all the way down to the details of the strategy itself as they need to piece all these together individually with their Qualia to base their decisions off the result to be able to fight another mage.

Weaknesses: No notable one

Bullet Magic: Bullet Magic is a technique in which mages imbue live rounds with mana to produce special effects. The Magic itself is a technique from the distant past. As the century of warfare continued, people sought a more practical application of magic thus laced bullets with magical effects become widespread among soldiers. A magic developed with a single goal, to murder.

Qualia: Those endowed with magical power, regardless of how much they had, possess this ability. Qualia is a sixth sense of sorts, an ability to observe the future. It is an ability that enables mages to evade bullets moving at supersonic speeds. A battle between mages is a battle between individuals capable of reading the future, which was why the mage who could see further forward came out on top.