VS Battles Wiki
Register
Don't have an account?
Sign In
Advertisement
in: Characters, Overlord, Light Novel Characters,
and 68 more 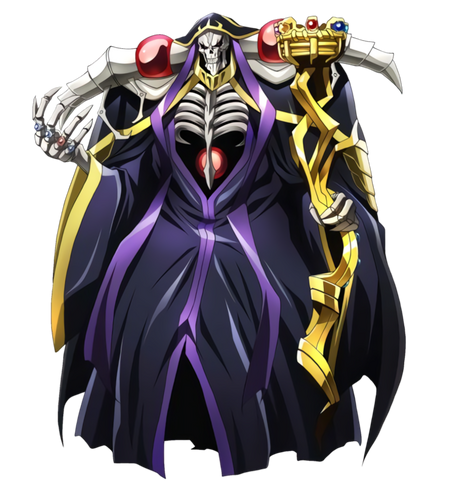 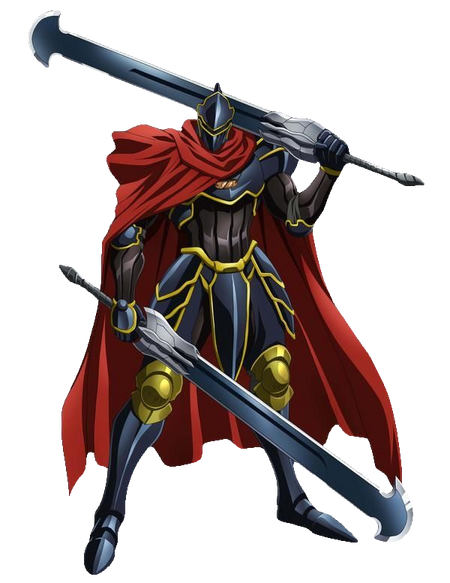 Ainz Ooal Gown (アインズ・ウール・ゴウン), formerly known as Momonga (モモンガ), is the main protagonist of Overlord. He is the guildmaster of Ainz Ooal Gown and regarded as the highest of the Almighty 41 Supreme Beings by the NPCs of the Great Tomb of Nazarick.

As the Sorcerer King of the Sorcerous Kingdom, Ainz leads the strongest army in the New World.

He is also known by his adventurer disguise, Momon, a dark warrior and leader of the Darkness adventuring team. He is an adamantite ranked adventurer and the most powerful adventurer in the Kingdom.

Originally a normal office worker, Suzuki Satoru was an avid fan of the DMMORPG YGGDRASIL where he went by the screen name Momonga, and was the leader of Ainz Ooal Gown, an extremely powerful guild known for its control over 11 World Items, including two of The Twenty, known as the most powerful 10% of all world items. They were also renowned for their impenetrable stronghold The Great Tomb of Nazarick, which was never conquered even by the strongest clans in the game, and capable of repelling an onslaught of 1500 Players without a single guild member raising a finger. As the guild was entirely made up of working members of society, the group also gained a foothold by the endless acquisition of paid items that gained them an advantage in battle. As the last person to stay in the guild on the final day of the game, Momonga finds himself transported into the New World, a world whose natural laws have been partially overwritten by those of YGGDRASIL’s by the appearance of multiple players across time, having been transformed into the form of his avatar. Taking the name of his guild in order to draw out former friends and foes, he begins a massive crusade for world domination through multiple plans and misdirections in the hopes of finding his comrades and seeing them once more.

Resistance to Magic, Poison, Disease, Sleep, Paralysis, Ice, Fire, Electricity, Acid, Necromancy, Petrification, Deconstruction (His Turn Resistance lets him resist undead-destroying abilities that can disintegrate undead), Death Manipulation, Energy Drain, Statistics Reduction, Status Effect Inducement (Blindness, Deafness, and Movement Impairment), Mind Manipulation (Including all forms of Empathic Manipulation), Information Analysis, Extrasensory Perception (Could not be sensed by Shalltear), Clairvoyance (Has a ring which protects him from Divination magic. Has an anti-scrying barrier which allows him to link an offensive spell back to the user of the Divination magic), Power Nullification (Would have resisted having his spells shutdown by CZ's skill had she not been buffed), Time Manipulation, Slashing Weapons, and Piercing Weapons. His World-Class Item grants him Resistance to BFR, Mind Manipulation, Soul Manipulation, Existence Erasure, Sealing, Reality Warping, Law Manipulation, Power Absorption (A World Class Item can trump the power of a Super Tier Spell like Wish Upon a Star, which Ainz could use to steal Nfirea’s Talent), Spatial Manipulation (Having a World Item allows one to walk through the World Separating Wall, which creates a space separate from reality), Resistance Negation

Attack Potency: At least Small Building level physically (Despite being a Magic Caster, he completely outclasses adamantite adventurers and veteran warriors such as Brain Unglaus and Gazef Stronoff, who themselves should be at least comparable to Gagaran), Small Town level with magic (Capable of leveling a medieval city district; capable of injuring Shalltear Bloodfallen with most serious spells), higher with the Staff of Ainz Ooal Gown, Small Town level physically with Perfect Warrior (Becomes on par with Shalltear Bloodfallen), Unknown with Wish Upon A Star (Capable of granting wishes, possibly even destructive ones, of unknown limit), Unknown with access to Nazarick's Treasury

Speed: Supersonic+ (Should be comparable to Albedo; fought with and defeated Shalltear)

Lifting Strength: Class 25 (should be superior to CZ2128 Delta)

Durability: Small Town level, Unknown when boosting his defenses with barriers, armor and more (Took numerous hits from Shalltear, and withstood being at the epicenter of a Super-Tier spell he had cast), higher with the Staff of Ainz Ooal Gown, immortality and various resistances make him extremely hard to permanently put down

Range: Varies, some high-tier spells can achieve up to tens of kilometers. Thousands of kilometers, possibly planetary via Greater Teleportation and Gate

Standard Equipment: The only item that Ainz carries on his person other than his equipment is his unnamed World-Class Item. Although its effects are unknown, all World-class Items grant their user extremely potent resistances to all effects that can be used by World-class Items. The rest of Ainz's items are contained within a pocket dimension which he can access freely by opening small portals to reach inside of. With time to prepare, he can also use cash shop items to lower cast times for super-tier spells or switch weapons instantly without having to reach into his inventory

This custom weapon spews out a vortex of dark red aura when held. Sometimes it forms the face of a human in agony that crumbles away. It is so vivid that it feels as though you can hear their voices of pain. The staff has seven snakes engraved on it, each clutching a gem that is a Divine class artifact, and aligned with the elements of Sun, Moon, Earth, Fire, Wind, Water and Time. Each gem has a unique ability and the power to summon monsters level 85 and above once a day. It is also able to greatly raise the user's racial abilities, allowing them to bypass immunities. Because each gem belongs to an entire series of items, since the complete collection is united, one can display its immense power. Ainz hesitates to use it because since it is a guild weapon, should it be destroyed, the guild of Ainz Ooal Gown will be disbanded. Ainz usually carries around a hollow replica with no special abilities.

While in his adventurer persona, Ainz uses jet black armor and twin greatswords. Without using Perfect Warrior, He has the physical ability of a level 35, but can still use low tier spells and skills. However, his techniques are rather rough and he doesn't use any martial arts skills at all. With perfect warrior in effect, he gains the physical abilities of a level 100 warrior, and his fighting style becomes properly skilled and in sync with his power.

Intelligence: An expert strategist in combat, Ainz always tries to fight with knowledge of his enemy, and doesn't underestimate his opponents. Unless he knows for sure that the enemy is no threat, he will usually start the battle with instant death spells like Grasp Heart, and will be quick to use his other powerful abilities depending on the situation

Weaknesses: Ainz is naturally susceptible to the holy and fire elements, but can negate one of those weaknesses depending on his choice of gear. Because of class restrictions, Ainz normally cannot equip most weapons and armor, but he can get around this restriction by using gear made by Create Greater Item or by using Perfect Warrior to temporarily change into a warrior class. He takes extra damage from crushing attacks, and The Goal of All Life is Death has a cooldown of exactly 100 hours. Can only teleport a distance of 1 kilometer with Greater Teleportation if teleporting to a place he has not already visited, or is not observing with Divination magic. Additionally, Ainz’s spells can be interrupted by enemy attacks unless he uses the Silent Magic modifier

While magic only goes up to the 10th rank, Super-Tier Magic is said to go beyond that, but it acts more like a special ability or a skill than an actual spell. Magic casters can unleash these spells without consuming any of their MP. The caster can learn one Super-Tier spell for each level after level 70. When it is first learned, it can only be used once a day. However, it can be used once more for every additional ten levels. The average player who has reached level 100 can use Super-Tier magic at least 4 times.

Furthermore, Super Tier Magic cannot be activated consecutively. Firstly, unlike other magic, it has an activation period, and if a certain amount of damage is done to the magic caster, it will interrupt the casting. Secondly, although it is possible to use cash items to remove this activation period, Super Tier Magic has a cooldown time for the whole party that cannot be removed.

Kamijou Touma (To Aru Majutsu No Index) Touma's Profile (Speed equalized, both were at their base)