VS Battles Wiki
Register
Don't have an account?
Sign In
Advertisement
in: Unknown Tier, Tier 4, Tier 4-A,
and 55 more 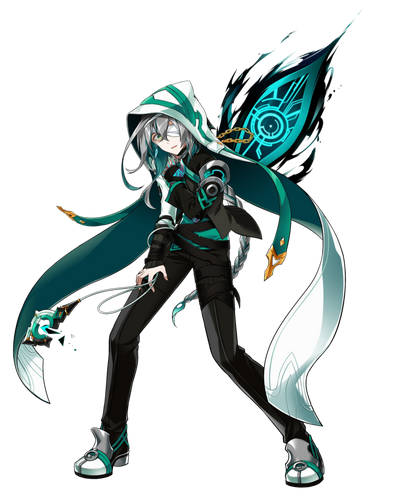 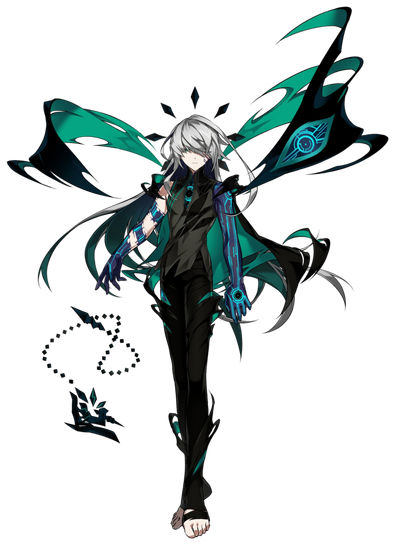 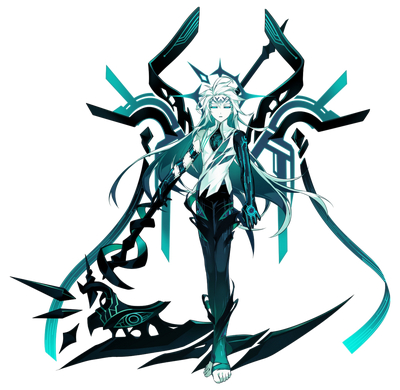 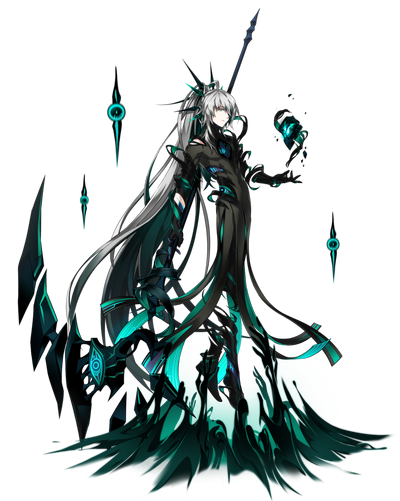 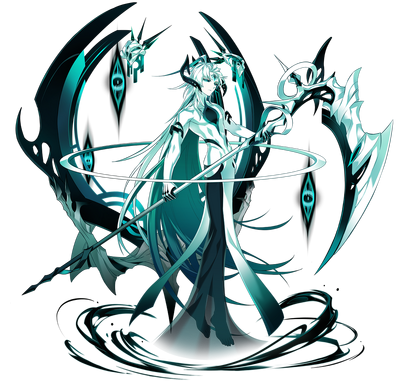 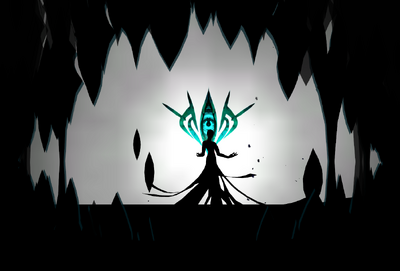 When Hoffman sent Ain on a quest into the Shadow Forest, Ain immediately fell prey to the demonic energy that emanated around him. His emotions evolved into fear and fury and a storm of violent emotion takes hold. Ain begins to panic when he sees this manifestation of dark energy swarming around him but regains composure when he hears the El Search Party's call.

Together with the El Gang, Ain tried using an El-powered Nasod machine to sedate the dark energy but it only got stronger. His last resort is to seek help from the Goddess Ishmael but when she does not respond, Ain falls into deep despair and his dark emotions feed the Seed of Chaos. The power of the Goddess starts to become corrupted, and his body, which exists solely for the mission, breaks down. Ain is now wrought with doubt. And from his doubt a new form emerges.

Ain carries on with the mission but as he continues to use his power, the chaos and the corruption further corrodes his body. Traces of Henir also emerge and become painfully obvious. He continues to suffer through the agony but only to continue his mission.

Ain heads to Feita to receive answers from the Goddess but upon arrival, he was overwhelmed by the presence of demonic energy and the sheer number of demons surrounding the area. Ain is unshaken and charges to battle but comes face to face with the Dark El. He becomes consumed by the fully realized Seed of Chaos.

"The mission is for those who will eventually disappear, and I who was created for nothing more than that mission, mean nothing."

Ain ascends from the chaos completely abandoning the Goddess and the mission. He has embraced Henir's chaos and ultimately becomes the Ruler of the Abyss.

After arriving at Elrianoade and defeating thousands upon thousands of monsters born from Henir's corruption, Ain finds himself facing his future self and merges with it.

As Herrscher, Ain is the Master of Void, reborn from emptiness, sending his enemies back into nothingness with endless chaos.

Once Ain denies the Goddess and accepts chaos, he began to destroy everything that stands in his path. Even his body was ephemeral, given to him by the Goddess. As such, Ain abandons his meaningless form to be reborn as the true Master of Void. He feels freedom the moment he throws away everything that tied him down along with his physical body and decides to reclaim his body in order to guide others to follow his path.

He was no longer of this world, merely a vestige of chaos.

As the Master of Void, he simultaneously exists everywhere, and nowhere. He guides the pitiful to his realm of Void.

Superhuman Physical Characteristics, Weapon Mastery and Weapon Creation, possible Acausality (Type 1), Status Effect Inducement (Includes Silence, Statistics Reduction, Freeze, Burn, and Bleeding), Magic, Afterimage Creation, Statistics Amplification (His durability and general power increases the more he uses Henir's powers), Astral Projection, Intangibility and Incorporeality (His true form is a spirital entity that resides beyond the physical plane), Regeneration (Low-Godly. Ain can exist merely as dissembodied consciousness, being able sustain and mantain a physical existence for himself), Immortality (Types 1, 3 and 8. Ain's existence is tied to his mission of restoring the El, always being able to come back as long as his mission is possible and ceasing to exist once his purpose is completed), Non-Physical Interaction and Soul Manipulation (Can attack intangible beings, ghosts, souls, spiritual beings and non-existent beings. The power of Chaos can destroy ethereal things.), Existence Erasure (Henir's power is the power to turn anything and everything into nothing), Spatial Manipulation and Time Manipulation (Can destroy and erase parts of space-time. Can isolate parts of space to create barriers), Damage Reduction (The damage he takes while with a Seed of Chaos is reduced), Teleportation, Energy Manipulation and Absorption (Constantly absorbs the energy from his surroundings, can absorb power), Mind Manipulation and Perception Manipulation (Can attack and twist the minds of others, breaking their will and bending them to his own will. Can also affect others's minds causing confusion on them and making them perceive nightmares which twists their perception of the surroundings), Corruption (Type 2. Henir's power and presence can corrupt beings, objects and the environment), Resistance to Soul Manipulation (Can take attacks to the soul), Status Effect Inducement and Corruption (Henir's corruption only took complete control of him when he accepted it, which resulted in Ain taking complete control over it.)

Same as before but to a higher degree, plus Void Manipulation (Has complete control over Henir's realm, which is a infinite void, unrestricted by space and time. Can create voids and turn targets into nothingness with Henir's power. Can turn abstract entities into nothingness), Reality Warping (Can distort and corrupt reality, areas affected by Henir's power are heavily warped and distorted), Death Manipulation (The aspect of Extinction is the cause of all mortality.), Chaos Manipulation, Damage Transferal (Can create a barrier which reflects 50% of the damage dealt back to the attacker), Matter Manipulation, Forcefield Creation (Can create a barrier made out of voids/Henir's realm that instantly erases whatever comes in contact with it and isolates himself inside Henir's realm. Can create a dimensional barrier that tears dimensions apart and reflect all attacks.), Homing Attack (Some of his attacks home on their targets), Resistance to Soul Manipulation, Void Manipulation (Can stand in the void that is Henir's realm without being affected.), Corruption (Ain is protected by Henir and his powers, being completely unaffected by its corruption and erasure properties)

Same as before but to an immensely greater degree, plus Abstract Existence (Type 1. Ain is the embodiment of Henir's power, realm/void, Chaos, Exctinction and Infinity, lacking any real form), Acausality (Type 4. A fraction Henir's Realm contains it's own kind of space-time with it's own rules, where past, present and future are interchangeable), Higher-Dimensional Existence, Nonexistent Physiology (Nature Type 2, Aspect Types 1, 2, 3 and 4. Lacks any form of existence and is nonexistence itself. Nature 3, Aspect Types 1 and 3 for his Shell. Ain's former physical body, which he uses as a shell to interact with creation, is a paradoxical body which while physical is also stated to no longer be something that truly exists), Immortality (Type 5, 8 and 9. Ain doesn't exist and embodies nothingness, being unable to be permanently destroyed unless someone can destroy Henir's power and realm. The body he uses to interact with creation is merely a shell controlled by his true self), Conceptual Manipulation (Type 1. The concepts which are aspects of Henir's Realm and power, those being Infinity, Extiction, Chaos and Nothingness/Nonexistence predate and are completely independent of reality)

Attack Potency: Unknown (Immensely superior to the rest of the El Party), can ignore conventional durability with certain powers. | At least Multi-Solar System level, likely higher (Superior to Elsword, who can defeat Solace, who can create a pocket reality containing a black sun and numerous stars.), possibly Multiverse level to Multiverse level+ (Has complete control over Henir's Realm, the realm of nothingness which is stated to be the beginning and end of all things, the end of everything as well as the destination all of existence must turn and return to, all of existence being composed of countless and possibly infinite timelines) with Henir's power. Can ignore conventional durability with certain powers | At least Multiverse level, likely Multiverse level+ (Has become one with Henir's Realm)

Lifting Strength: Unknown | Unknown | Immeasurable (4-Dimensional structures are floating in his void self)

Weaknesses: Ain suffers from constant panic attacks and anxiety. He will cease to exist if his mission can't be somehow completed. | None notable | None notable