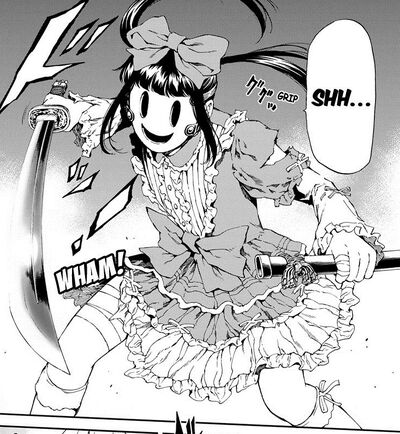 Ain is the name used by the first Angel recruited by Kuzuma Aohara, a doctor and one of the humans who were tranported to the skyscraper world who managed to become a person closer to god. Ain mainly acts as Kuzuma's bodyguard and follows all his orders.

Attack Potency: Wall level (Casually slices through a small tree and a metal pole during her fight with Mayuko Nise)

Speed: Superhuman (Is a strong mask and can keep up with Mayuko Nise, sliced two Angels to pieces and rescued the baby they were holding hostage in 0.3 seconds)

Weaknesses: Normal human weaknesses, she gets tired faster than other Angels while fighting due to her small body and her weapon of choice

Retrieved from "https://vsbattles.fandom.com/wiki/Ain?oldid=4633075"
Community content is available under CC-BY-SA unless otherwise noted.