VS Battles Wiki
Register
Don't have an account?
Sign In
Advertisement
in: Tier 9, Tier 9-B, Unknown Tier,
and 16 more 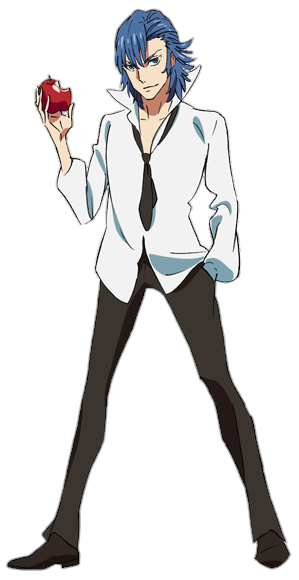 Aikuro Mikisugi is a supporting character in Kill la Kill. He's a member of a secret organization known as Nudist Beach that defends the denizens of Earth from the Life Fibers. He is currently the de facto leader of the organization after the founder of the group, Isshin Matoi, was murdered by Nui Harime. In order to investigate, Aikuro went undercover at Honnouji Academy as a boring history without a spine in order to keep an eye on the events happening there.

Despite his eccentricity and the fact he isn't a legitimate teacher, he has still shown to deeply care for his students and is willing to put his life on the line in order to make sure they are safe.

Attack Potency: At least Wall level (Stronger than or at least comparable to Beginning of Series Base Ryuko.) | Unknown (Should be much stronger than Tsumugu Kinagase in his base form. The entire Nudist Beach DTR troops held their own against the Elite Four's MKII uniforms for nearly an entire episode in an offscreen battle)

Speed: At least Superhuman (Very casually evaded Ryuko. Who at this point could effortlessly outpace multiple people capable of performing many complex maneuvers just in a couple of seconds), likely Supersonic+ (Neither he or BoS Ryuko should be too much slower than base Mako) | Sub-Relativistic (Comparable to Tsumugu and fought alongside him in combat)

Lifting Strength: Superhuman (His strength is on par with Ryuko's) | At least Class 1 (Is far stronger than base Tsumugu)

Durability: At least Wall level | At least Large Town level (The DTR Troops were capable of surviving combat against the MKII Elite Four)

Intelligence: Genius (Has Genius level intellect when it comes to mechanics and engineering. Being able to create highly advanced mech suits. Is also proficient in various subjects such as history and math, as he was successfully able to cover as a teacher. As well as having extensive knowledge of human anatomy and medicine. Has been involved in numerous experiments regarding extraterrestrial life and made weaponry that can neutralize their physics defying supernatural powers. Skilled in hand to hand combat)

Key: Base | With DTR