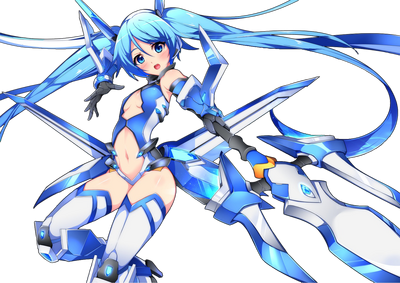 A 15-year old freshman of Yōgetsu Private Academy and childhood friend of Sōji. She sees Sōji like a little brother and is rather over protective of him. Aika has complex with her body, especially with her flat chest. She has a violent attitude toward Twoerle who often teases her about her chest. In battle, Aika has an outstanding ability of fighting as she was raised by her grandfather with martial arts. She is known as Tail Blue when she transforms, and her weapon is Spear of Water, Wave Lance (水の槍ウェイブランス Mizu no Yari Weibu Ransu?). In Vol 8, she gains Eternal Chain.

Attraction: The power that exists in the human heart and allows to love something. Using it, one can achieve different effects ranging from simply increasing physical characteristics to manipulation of water, fire, and even gravity.

Retrieved from "https://vsbattles.fandom.com/wiki/Aika_Tsube?oldid=6616291"
Community content is available under CC-BY-SA unless otherwise noted.