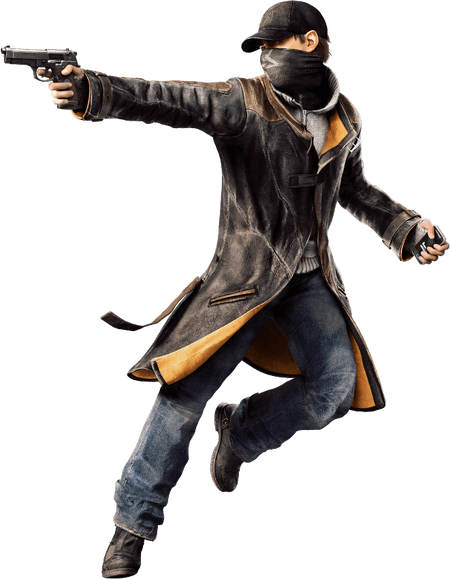 Aiden Pearce (also known as "The Vigilante" and "The Fox" by citizens and the media) is the protagonist of Watch Dogs. He is a highly skilled gray hat hacker who has access to the ctOS of Chicago using a highly specialized device, the Profiler, to which Clara Lille later adds more capabilities.

Because his actions led to a family tragedy, Aiden has taken to a personal crusade against the powers that be. His obsession with security, surveillance, and control borders on the paranoid and dangerous, extending to monitoring his own family (unbeknownst to them).

Attack Potency: Wall level (Can easily dispatch of multiple trained police officers without issue and can easily overpower heavily-armored personnel with just a baton. Can trade blows with those capable of harming him. Can kill armored officers with just a slide), higher with most firearms (Can easily mow down through armored vehicles. Makes use of the AA-12 and the Barrett M82 rifles, which can easily blow up ordinary cars with a few shots). Small Building level after obtaining the Enforcer Takedown Skill (Can easily knock out Enforcers with just three strikes of his baton, and the upgrade is permanent. Enforcers are capable of taking at least 2 IEDs at point-blank range before dying) and explosives (Can easily blow up large trucks and vans with just one grenade, which is superior to blowing up a normal sedan). Unknown with the Profiler (Can hack into anything connected to the ctOS) | At least Small Building level+ physically (Stomped a drunk Raymond Kenney, who was already capable of no-selling car explosions at point-blank range prior to meeting Aiden. Overpowered Jordi Chin, who easily stomped Marcus Holloway. Easily overpowered several Abstergo security guards in his mission to kill Olivier Garneau, the CCO of Abstergo Entertainment, and most Abstergo guards are somewhat comparable to, if not stronger than Daniel Cross and Juhani Otso Berg), higher with melee weapons and firearms (His weapons become considerably superior with more upgrades), even higher with the Enforcer Takedown skill and most explosives. Unknown with the Profiler

Speed: Peak Human, at least Supersonic+ via Slowed Focus (Can easily get out of the way of M4 Carbine rounds and even view explosions in slow-motion). Subsonic+ to Supersonic+ firing speed with most firearms | Peak Human with at least Supersonic+ combat speed and reactions, higher via Slowed Focus (Becomes considerably swifter than before. Fought on par with Abstergo guards, who can outpace rounds from M4 Carbines and Browning M2 machine guns and relived the lives of the enemies of Ezio Auditore da Firenze as part of the Animi Training Program. Should be comparable to other DedSec members who can dodge bullets by rolling). Subsonic+ to Supersonic+ firing speed with most firearms

Lifting Strength: At least Athletic Human (Can easily push back heavily-armored guards on his lonesome, and do strenuous parkour moves. Can also perform wheelies on chopper-styled bikes)

Durability: Wall level (Survived the car crash that resulted in the death of his niece. Can survive high falls and violent car crashes without any problems. Regularly dives into water from heights that would normally be lethal for ordinary humans. Being run over by boats only causes him minor inconvenience. Can survive being burned for extended periods of time. Regularly tanks high-caliber bullets that can tear armored personnel apart), Small Building level via Blast Resistance Combat Skill (Can survive IEDs exploding at point-blank range, which can easily blow up vans and trucks in one go. Can survive being at the top of an exploding vehicle) | At least Small Building level+ (Easily no-selled hits from a drunk Raymond Kenney while being drunk himself. Took hits from Abstergo guards), higher with Blast Resistance Combat Skill

Standard Equipment: The Profiler (A tool that allows him to gain access to anyone's personal information and hack anything connected to the Blume Corporation's OS in Chicago), a baton, an entire arsenal of firearms ranging from pistols, revolvers, assault rifles, machine guns, grenade launchers, shotguns and anti-materiel sniper rifles

Intelligence: Genius. Is an incredibly-skilled hacker and has full knowledge on most of ctOS's infrastructure.

Weaknesses: Regular human weaknesses. Each ability has a specific cost of the Profiler's battery, meaning that the hacking abilities cannot be overused without waiting for the battery to reload once it is empty. Focus lasts for a limited time. Often depicted as cold-hearted, which makes it hard for people to socialize with him, and is potentially prone to violent outbursts. He will put himself in harms' way to protect his loved ones.

Retrieved from "https://vsbattles.fandom.com/wiki/Aiden_Pearce?oldid=6923433"
Community content is available under CC-BY-SA unless otherwise noted.