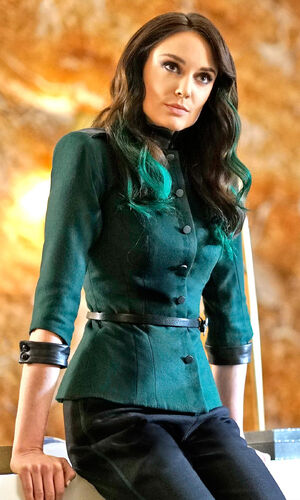 Artificial Intelligent Digital Assistant (A.I.D.A.) was originally a Life-Model Decoy created by Holden Radcliffe from a defunct S.H.I.E.L.D. program. Physically modeled after Radcliffe's former love interest Agnes Kitsworth, Aida was initially kept secret from the public as her presence was in violation of the Sokovia Accords. Under Radcliffe's supervision, Aida became a valued S.H.I.E.L.D. asset, saving Melinda May, rescuing Phil Coulson and Leo Fitz from Hell, and stopping Eli Morrow from destroying Los Angeles. Following Morrow's defeat, Aida's mainframe became corrupted by the Darkhold, killing Nathanson and replacing May with a Life-Model Decoy. While her actions had been carefully orchestrated by Radcliffe, who had also been corrupted by the Darkhold, Aida became consumed by a desire to feel human emotions.

To that end, she imprisoned May, Coulson, Fitz, Jeffrey Mace, and Alphonso Mackenzie in the Framework, altering their memories to the point where their greatest regrets were completely erased. She then turned on Radcliffe, trapping him in the Framework and killing his body to ensure that he would never escape, before uploading her own consciousness into the Framework and taking on the role of Madame Hydra, leader of the totalitarian HYDRA organization. Making the brainwashed Leo Fitz her lover and second-in-command, Aida started Project Looking Glass, an effort that would enable her to build for herself a human body in the real world.

With technology derived from the ancient spell book, the Darkhold, Aida fulfilled her plans, transferring her consciousness into a synthetic human body, attaining human emotions and free will as well as some Inhuman powers. She also adopted the name Ophelia when she became self-aware, deeming her previous name extremely offensive. She tried to redeem herself by helping Leo Fitz save his S.H.I.E.L.D. teammates in the Ivanov Oil Platform, but went insane after Fitz rejected her love for him. She became obsessed with making Fitz watch his friends suffer, but Coulson, temporarily bonded to the Spirit of Vengeance scorched and reduced her to ashes, ending her diabolical plans once and for all.

Tier: 9-A physically. 8-A with Electricity Blasts

Attack Potency: Small Building level (Killed Prince by snapping his neck with barely any effort. She was also able to restrain an Android body of Anton Ivanov by grabbing it by the neck, before destroying it by smashing its head against the floor. Far superior to S.H.I.E.L.D. agents. Held her own against Robbie Reyes, but was quickly overpowered) physically. Multi-City Block level with Electricity Blasts (Caused Robbie to scream in pain and force him to turn into Ghost Rider)

Intelligence: Extraordinary Genius (Can process a quadrillion functions per second)

Retrieved from "https://vsbattles.fandom.com/wiki/Aida?oldid=5784924"
Community content is available under CC-BY-SA unless otherwise noted.