VS Battles Wiki
Register
Don't have an account?
Sign In
Advertisement
in: Tier 9, Tier 9-B, Characters,
and 48 more 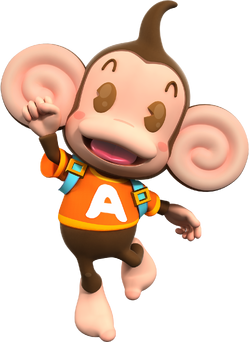 AiAi is one of the main protagonists in SEGA's Super Monkey Ball video game series. He is a long-time resident of Jungle Island, residing with his wife MeeMee and son Baby. He is given his magical powers starting in Super Monkey Ball to try and make it to Banana Island before GonGon, who is AiAi's rival at the time. By the time of Super Monkey Ball 2's events, he and AiAi are best friends and the four stop Dr. Bad-Boon from stealing all the bananas.

He is a carefree monkey who really loves bananas, almost more than his wife. When someone is threatening the peace, he is always the first to spring into action as a leader of his team.

Powers and Abilities: Superhuman Physical Characteristics, Superhuman Speed, Vehicular Mastery and Spaceflight (Via spaceships), Summoning and Magic (Can use a magical spell "Ei-Ei-Poo" to summon a ball around him which allows him to bounce very high as well as super speed), Martial Arts (Is a skilled boxer and can perform powerful punches for his size), Weapon Mastery, Flight (By himself, Rocket and Hoverball. Can even open his ball to glide/fly around), Statistics Amplification (Can increase his speed for a limited time via Speed Star/Power Boost/Speedyball and his glove's striking power via Iron Punch), Transmutation (Can turn an opponent's ball into polygonal via Polygon Ball), Surface Scaling (Via Stickyball), Size Manipulation (Can increase his size for a short period of time via Big Ball. Can increase his glove's size via Big Punch and even shrink himself down to bounce via Super Bounce or both decrease/increase via Scalarball), Elasticity (Can make his punch's range much longer via Long Punch power-up), Ice Manipulation (Can freeze opponents via Ice Cube), Homing Attack (Via Hunter Missile), Explosion Manipulation (Via Hunter Missile/Coconut Bomb/Bowling Bomber), Status Effect Inducement (Can obscure an opponent's view via 3D Glasses), Air Manipulation (Can summon tornadoes via Typhoon), Attack Reflection (Via Typhoon/Big Ball), Temporary Invulnerability (Can temporarily protect himself from attacks via Big Ball), Gravity Manipulation (Via Gravity Shot), Magnetism Manipulation (Can attract bananas to his ball via Banana Magnet), Energy Projection (Can shoot powerful ricocheting beams via Photon Ball), Broadway Force (Via Disco Ball), Teleportation (Can teleport to various places if he wishes via some items in Super Monkey Ball Adventure), Water Walking (Can roll on water for a limited time via Woodball), Invisibility (Can turn himself invisible via Invisiball)

Attack Potency: At least Wall level (Comparable to GonGon, who sent a time bomb flying towards Dr. Bad-Boon's airship and partially blew it up. Can send his opponents flying by striking them with either his fists and a ball. Beat Jet countless times, despite him being trained in many martial arts), possibly higher (Alongside his team, destroyed a core which blew up Dr. Bad-Boon's whole base)

Speed: Subsonic (Can run over 50 mph or higher inside his ball. Can keep up with Baby, who is stated to be able to crawl at lightning-fast speeds) with Supersonic (Can react to Dinobot and Bazooka Baboon's missiles and dodge Down-Under Diva's soundwaves from her microphone) to Sub-Relativistic reactions (Can pilot spaceships which is able to easily fly in space and tag flying saucers/UFOs, even being able to dodge their laser beams)

Durability: At least Wall level (Can survive hundred-foot falls multiple times), possibly higher (Comparable to Dr. Bad-Boon, who survived his space base exploding and falling back to Earth)

Weaknesses: Prefers to fight inside his ball than outside of it.