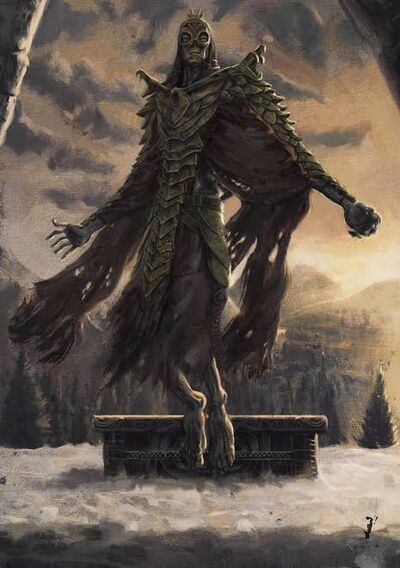 Ahzidal was a Nord born in the Merethic Era, in the days beyond memory under the city of Saarthal, built when the Men of Atmora first migrated to Tamriel and met the Snow Elves who lived in the lands of Skyrim. Even as a child, he showed an innate talent for the arts of Magic and Enchantments, something that became apparent to his instructors, who were quickly surpassed by him, along with everyone else in Saarthal as he grew up. Seeing that he had no more to learn among his kind, he travelled to learn more from the Elven Masters of the Merethic, leaving behind his beloved city, as well as his wife and child.

After three years of learning, Ahzidal returned to Saarthal, only to find it in smoldered ruins, burnt to the ground by the Snow Elves, who killed everyone who lived there, leaving Ysgramor and his two sons as the sole survivors of the massacre, known later as the Night of Tears. Seeing his home completely destroyed, Ahzidal swore an oath of vegeance against the Snow Elves, and knowing that he was no match for them even with his current powers, he started to search for power and knowledge with the other Merethic Elves, walking among Altmer, Chimer and Falmer, being taught the secrets of the Dawn Era by the Ayleids, and learning of the seven natures of metal and how to harmonize them with the Dwemer, gathering all of the knowledge he could until there was nothing left to learn with the Elves anymore. And after hearing Ysgramor had prepared an army to siege the Snow Elves of Skyrim, he offered his help, imbued their armor and weapons with his most powerful enchantments, allowing the Atmorans to outmatch the Elves and ultimately take Skyrim as their home.

However, even having his home avenged was no longer enough for Ahzidal. The Years spent learning with the Elves had left him with an immense thirst for knowledge, and eventually he started to seek perfection, unravelling the secrets of the Dragon-Rumes and taking seat among the most powerful Dragon Priests, and in his hunger for more knowledge, Ahzidal travelled to the Planes of Oblivion, eventually obtaining knowledge from the Daedric Princes themselves, although said knowledge would come at the cost of his sanity.

Name: His original name is unknown, took the name of "Ahzidal" (Bitter-Destroyer or The Embittered Destroyer in Dovahzul) upon becoming a Dragon Priest

Age: Over 5000 Years Old as of 4E201. Born during the Middle of the Merethic Era in Saarthal, the first city constructed by the Men of Atmora upon arriving on Tamriel, in "the days beyond memory".

Powers and Abilities: Superhuman Physical Characteristics, Immortality (Types 1 and 7), Regeneration (Mid-Low), Flight, Magic, Reality Warping (All Magic comes from the act of an individual exerting changes upon reality in accordance to their Will. Was taught by the Ayleids to use the Ancient Runes and Magic of the Dawn Era, the timeless period where all Souls were divine metaphors who breathed and reshaped whole new realities into existence), Creation, Fire Manipulation, Summoning, Metal Manipulation, Mind Manipulation (Could insert thoughts and emotions into Ralis Sedarys' mind, driving him mad and taking control of his mind), Illusion Creation, Soul Manipulation and Absorption (Could consume the Souls of the miners sacrificed to him by Ralis Sedarys), Matter Manipulation, Weather Manipulation, Telekinesis, Teleportation, BFR, Body Control, Forcefield Creation, Biological Manipulation, Physics Manipulation (Gathered all of the knowledge possessed by the Ayleids of the Merethic Era, who were the creators of Alteration Magic, which is capable of altering the fundamental laws governing physics and biology), Sleep Manipulation (Alteration Magic is capable of making an enemy grow increasingly weary to the point of exhaustion), Paralysis Inducement

Attack Potency: Universe level+ (Fought with a late-game Dovahkiin who had already defeated Alduin at that point, and like the other Dragon Priests, he is comparable to Pre-Apocrypha Miraak, who albeit far weaker than he is by the time of the Fourth Era, was still said to be capable of slaying Alduin, both by the Three Tongues and by himself. Capable of wielding the Magicks of the Dawn Era, the timeless and non-linear period where there was no difference between Mortal and Divine, and all Souls were formless, living ideas and metaphors unbound by the laws of nature, described as "breathing whole new realities" into existence)

Speed: Immeasurable (Can fight with the Last Dragonborn, who at this point had defeated the Alduin, who exists unbound by linear time and is superior to Jills who are responsible for mending-minutes and repairing Dragonbreaks)

Durability: Universe level+ (Capable of doing battle with the Last Dragonborn and enduring their blows, and is described as being equally powerful to a younger Miraak, who was believed to be able to defeat Alduin)

Stamina: Physically tireless as an undead

Range: Hundreds of thousands of meters to Low Complex Multiversal with Magic (Far superior to master Mages capable of conjuring fiery storms which incinerate entire armies, and should scale to powerful ones capable of travelling to Oblivion and teleporting individuals to pocket realms contained in it), likely far higher with Dawn-Magicks

Standard Equipment: His Mask, as well as large groups of summoned Draugr.

Intelligence: Extraordinary Genius. Even as a child, Ahzidal showed an innate talent for Magic and Enchantments, and became the most powerful Nord Enchanter in Saarthal as an adult, before travelling for three years to gather more knowledge with the Falmer of the Merethic Era, and becoming possibly the first Human to fully master the enchantments of the Elves. Spent an untold amount of time walking among the Merethic Elves, having learned of the ancient runes and the Magicks of the Dawn Era with the Ayleids and Altmer, and the seven natures of metal and the capacity to harmonize them with the Dwemer, until he eventually stressed out all of the wisdom possessed by the Elves; went on to learn about the secrets of the Dragon-Runes, becoming a Dragon Priest and then travelling to the Planes of Oblivion in his hunger for more knowledge and search for perfection, gathering the wisdom of the Daedric Princes themselves, though at the cost of his own sanity.