VS Battles Wiki
Register
Don't have an account?
Sign In
Advertisement
in: Tier 5, Tier High 5-A, Tier 4,
and 63 more

Ahzek Ahriman is a Chaos Space Marine and the most powerful Chaos Sorcerer of the Thousand Sons Traitor Legion after their Daemon Primarch Magnus the Red himself. Ahriman seeks to gain entry into the Black Library so that he might better comprehend the nature of his patron Chaos God Tzeentch and of the force of Chaos itself and gain the unrivalled power such knowledge will bring. His action in crafting the Rubric of Ahriman, perhaps one of the greatest works of sorcery in history, would ultimately result in his banishment from the Legion he had hoped to safeguard. He remains a wanderer across the galaxy, forever seeking out any knowledge that will allow him to finally grasp the greatest of all enigmas in the galaxy—the true nature of Tzeentch himself.

Across a thousand worlds, Ahriman has sought the keys to save what he has already destroyed. The scars of his obsession have made his name a curse in the mouths of humans and aliens alike. Scraps of lore, artefacts both obscure and profane, and rare souls draw him like a raven to a corpse. To the Eldar, he is the carrion scribe who eats the souls of their dying race for secrets, to the Inquisitors of the Ordo Malleus he is the lightning rod which brings a storm of Daemons, amongst the servants of Chaos he is a flame of power and trickery as likely to burn those drawn to his light as to illuminate them.

A master of subtle manipulation, Ahriman has seeded cults on a hundred worlds, and bent the desires of the powerful to achieve his ends. With conspiracies and plots spread across the galaxy, he coils between them, a puppet master pulling invisible strings. When such subtle means are impossible he wages a sorcerer’s war, forcing armies to kneel with visions of terror, shattering war machines with invisible forces, and ripping the souls from mighty heroes. He knows the true names of daemons, and possesses pacts which can bring armies flocking to his call. Worlds have burned at his command, billions have fallen to the hunger of the Warp, and reality has bled at the fury of his power.

Attack Potency: At least Dwarf Star level (Fought against an incredibly skilled Shadowseer who was capable of cleaving a Bloodthirster in two. Bloodthirsters like the Storm Prince can tank this. Overpowered and sealed Be'lakor, the First Daemon Prince of Chaos, leaving him to be suffer and be humiliated at his mercy), possibly Solar System level (One of the strongest Champions of Chaos, considered to be in the same league as Khârn. Capable of pulling others into a controlled pocket of the Webway in which even something like the Yncarne could not act against him. Performed a ritual that tore a system's sun from existence and replaced it with a massive Warp portal, all to power himself up and summon more daemons. Should be superior to the Masque of Slaanesh, who caused a supernova that wiped out a system.). Can ignore conventional durability with much of his abilities (Can destroy matter on an atomic level, rip apart opponents physically, spiritually, and mentally, cause his foes' organs to explode and incinerate them from the inside out).

Speed: Subsonic movement speed. At least FTL reactions/combat speed (Much faster than most other marines, the most highly trained of which are capable of reacting and processing information in under a nanosecond), possibly Massively FTL+ (Comparable to characters such as Khârn), higher with his abilities (Can enhance his speed to a point where opponents of similar speeds only see him as a blur).

Lifting Strength: Class 100 (Should be comparable to the strongest Space Marines in the setting), far higher with telekinesis

Durability: At least Dwarf Star level (Tanked an explosion with the force of numerous solar flares, only taking minor damage to his unprotected face and being slightly annoyed. Blocked an attack capable of cleaving a Bloodthrister in two.), possibly Solar System level (Should be comparable to Khârn due to being one of the strongest Champions of Chaos and being considered of the same league as the Betrayer. Comparable to Iskandar Khayon, who survived hits from a perfect clone of Horus Lupercal.).

Stamina: Very high, dwarfing that of other Space Marines, who can fight for weeks at a time.

Range: Tens of Meters with Bolt Pistol, Kilometers to Stellar (With a ritual, he can destroy a system's star and replace it with a warp portal) with psychic abilities

Intelligence: Extraordinary Genius. Ahriman's thousands of years of experience and psychic knowledge make him a genius of supernatural degree, even by the standards of other significantly intelligent Astartes, such as former legionnaire Iskandar Khayon, who possesses immense knowledge on the mannerisms of the Immaterium. Holds an exceptional level of intellect in the fundamentals of the Warp and its denizens, using both to aid him in combat effectively than any typical or even seasoned wielder of psychic powers on the field.

Weaknesses: Ahriman can sometimes make rash decisions in the heat of the moment.

- Biomancy is a psychic discipline revolving around the control and manipulation of organic materials. Techniques from this discipline include:

- Divination is a psychic discipline which allows Ahriman a crystal clear view of future events and control over the forces of probability and luck. Techniques from this discipline include:

- Pyromancy is a psychic discipline focused on calling forth the full power of supernatural fire. Techniques from this discipline include:

- Telekinesis is a psychic discipline which allows Ahriman to utilize traditional telekinesis in new and deadly ways. Techniques from this discipline include:

- Telepathy is a psychic discipline which allows Ahriman to wreak havoc on the minds of his enemies. Techniques from this discipline include:

- Daemonology is a psychic discipline revolving around use of the Warp to control forces related to it. Techniques from this discipline include:

- Sinistrum is a psychic discipline built upon the deepest, darkest depths of Chaotic lore, of which Ahriman's knowledge is second to none. Techniques from this discipline include:

- Heretech is a psychic discipline that allows Ahriman to turn enemy technology on its users and rend even the mightiest of war machine's hulls as if they were only tissue. Techniques from this discipline include:

- Ectomancy is a psychic discipline focused on using the raw energies of the Warp to mutilate foes and tear apart the fabric of reality itself. Techniques from this discipline include:

- Geomortis is a psychic discipline that allows its users to change the landscape of entire battlefields and planets, causing them to be feared as the murderers of worlds. Techniques from this discipline include:

- The Discipline of Tzeentch/Change is a psychic discipline exclusive to sorcerers of the Architect of Fate. Calling upon the same essence that forms Tzeentch himself, powerful psykers wield the raw forces of madness and mutation. Techniques from this discipline include: 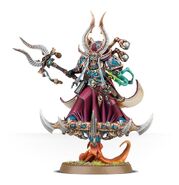 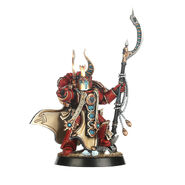 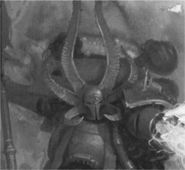 The Daughters of Oryx (Destiny) The Daughters' profile (Speed was equalized, Deathsingers were 4-B)

Elminster Aumar (Dungeons and Dragons) Elminster's Profile (Speed was equalized, both had three months to prepare and had limited prior knowledge, 6-B Elminster vs High 5-A Ahriman)