VS Battles Wiki
Register
Don't have an account?
Sign In
Advertisement
in: Tier 9, Tier 9-A, Tier 2,
and 46 more 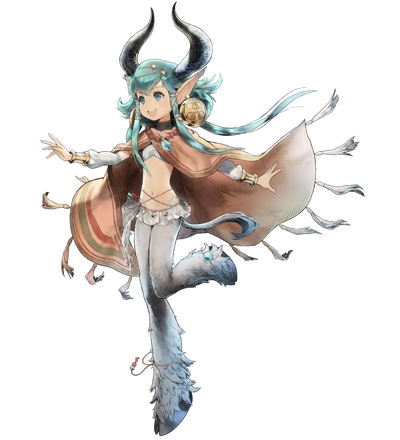 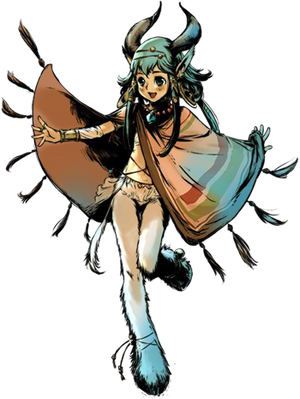 Aht is a playable character in Radiant Historia. She is an innocent yet wise Satyros girl who travels the continent as part of an entertainment troupe. Gifted with shamanic powers, she is a central figure among her people, revered as a sacred priestess who watches over departed souls.

Superhuman Physical Characteristics, Enhanced Senses (Can see the invisible with Mana Vision, was the only one capable of seeing Lippti and Teo whenever they came to talk with Stocke), Longevity (Satyros can live for hundreds of years), Self-Destruction (Can make a powerful explosion on a target at the cost of her life), Resurrection (Shamans are able to do this to the dead, sacrificed herself for this on Stocke in a timeline), Pocket Reality Manipulation (In a timeline she sealed Stocke in one she made to protect him for all of his life), Sealing (Shamans are able to do seals that nullify curses on objects), Soul Manipulation (Managed to hit a legion of ghosts, can send souls to the afterlife, can undo Astral Projection), Non-Physical Interaction, Weapon Mastery, Life Manipulation (All Satyros are able to manipulate Mana, which is the flow of life in all beings), Healing (Via multiple items, the Greater Heal and Area G-Heal spells), Poison Manipulation and Status Effect Inducement (Can poison her foe with Poison Wing and the Poison Trap spell), Danmaku (Many of her techniques involve throwing multiple daggers to targets), limited Resurrection, Holy Manipulation and Water Manipulation (Can revive others with Holy Water), Purification (Via multiple items such as the Anti-Poison, Anti-Stone, Anti-Sleep, Anti-Curse, Anti-Fear and Anti-Paralytic items to heal the respective status effects), Magic (Can use multiple spells), Fire Manipulation (Via the Bomb Trap spell), Electricity Manipulation (Via the Electric Trap spell), Ice Manipulation (Via the Ice Trap spell), Information Analysis (Via the Enemy Scan spell, which allows to see the resistances and weaknesses of a target), Explosion Manipulation (Via Trap spells and Self-Destruction), Sleep Manipulation (Can force an opponent to sleep with Sleep Wing or the Dreamless technique), Statistics Amplification (Can raise her own durability with the Shield Herb item, the Polaris spell raises the resistances of multiple status effects to herself and allies, Lunatic noticeably raises the magical durability of herself and allies), Statistics Reduction (Can lower the speed of a target with the Speed Break technique), Awakened Power (Via Mana Burst moves), Resistance to Poison Manipulation, Petrification, Paralysis Inducement, Curse Manipulation, Item Nullification, Sleep Manipulation and Fear Manipulation (Via the Quartz item and the Polaris spell)

All previous, further Statistics Reduction and Statistics Amplification (Via the Power Herb item, which lowers the AP of a target, and the Might Herb and Magic Herb items, which raises the physical AP of the target after use)

All previous, Summoning (Via Imperion), further Statistics Reduction (Multiple additional items such as the Magic Defense Down item lower the magical durability of the target), Power Nullification (Can nullify two attacks with the Shield Seed item), Resistance to Life Manipulation (The Etherium item passively prevents his life force, "mana", from being drained by external forces),

All previous, Resistance to Time Manipulation (Historia lacks the flow of time), possibly Higher-Dimensional Existence and Large Size (Type 10) while in Historia

Attack Potency: Small Building level physically (Comparable to her friends, which can defeat spiders of the size of a building) | At least Multiverse level+, possibly Low Complex Multiverse level (Collaborated in the defeat of the Singularity, which is far stronger than Lippti and Teo, to defeat it all the power of the White, Black and Red Chronicles had to be used together, isn't too far behind Stocke)

Speed: Relativistic (Comparable to others that can react to lasers) | At least Relativistic, possibly Immeasurable

Stamina: High (Can travel across the entire continent without issue)