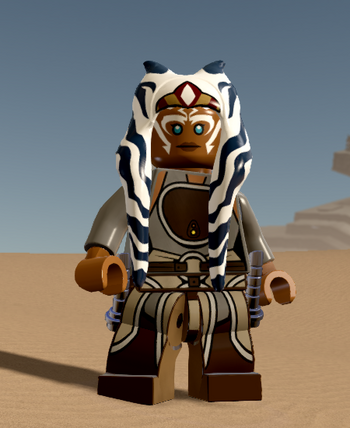 Ahsoka Tano was an apprentice to Anakin Skywalker during the Clone Wars until she left the Jedi Order. Years later she would become a soldier of the Rebel Alliance.

Age: 30's During the Reign of the Empire

Speed: Peak Human (Comparable to Stormtroopers) with Subsonic Reactions (Capable of deflecting blaster bolts that move at the same speed as arrows)

Striking Strength: Wall Class physically and with most weapons, Building Class with the force.

Intelligence: High, capable of building complex structures made of hundreds of parts in a matter of seconds.

Weaknesses: Has to be stationary when using the force

Retrieved from "https://vsbattles.fandom.com/wiki/Ahsoka_Tano_(Lego_Star_Wars)?oldid=6615933"
Community content is available under CC-BY-SA unless otherwise noted.