VS Battles Wiki
Register
Don't have an account?
Sign In
Advertisement
in: Tier 1, Tier 1-A, Characters,
and 42 more 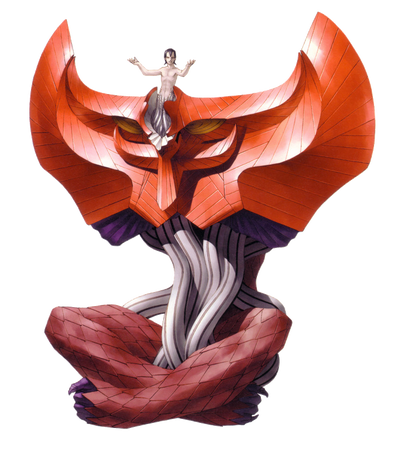 Ahriman, also known as Angra Mainyu is the Zoroastrian god of evil and the void, and the eternal opponent of Ahura Mazda, the supreme deity of light, life and righteousness, being the entity responsible for the creation of the world's plagues and evils, and governing legions of dark spirits known as "daēvas." He is said to have fought against Ahura Mazda long before the creation of the world, in a battle that ultimately resulted in him being defeated and cast into the depths of the abyss.

This relationship between the two, as well as Zoroastrianism's status as a monolatric religion, bring Ahriman in close proximity to the western conception of "Satan" or "The Devil" as a malign entity who rebels against God's light, and some even theorize that the figures of Ahriman and Ahura Mazda inspired such dichotomy to begin with.

Classification: Demon, Archetype, Great One, Tyrant, God of the Void, Sponsor of the Reason of Shijima, Counterpart of Ahura Mazda

Attack Potency: Outerverse level (The primary and most powerful demonic authority behind the Assembly of Nihilo, being considered the God of Shijima and the only deity powerful enough to sponsor Hikawa's Reason, thus putting him massively above the likes of Mot and by extension Baal, Metatron and Beelzebub. Stated to be a natural resident of the archetypal abyss of Atziluth, having battled Ahura Mazda long before the awakened world was even born, and holding his own domain in it in the form of the Tower of Ethics)

Durability: Outerverse level (Can receive numerous attacks from foes as powerful as the Demi-Fiend and the late-game cast of Eternal Punishment. Did battle against Ahura Mazda, his equal and opposite in both power and status, in the mythical past, although was ultimately defeated and cast into the abyss)