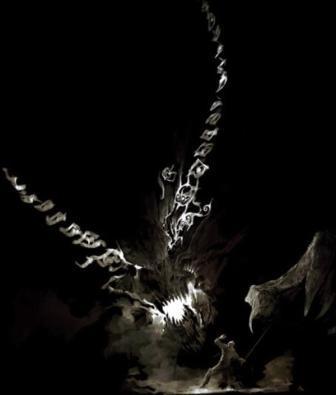 Ahriman is the God of Darkness, and brother of the missing Ormazd, they had both created the universe together and made a land to rule, but one day Ahriman had wanted all the power to himself and tried to kill Ormazd, and everyone in their kingdom, only to be sealed away by his brother and The Ahura.

Powers and Abilities: Superhuman Physical Characteristics, Immortality (Type 1), Darkness Manipulation, Transmutation (His mere presence turns water into corruption), Summoning (Him being released would not only bring him out, but his army of 1,000 soldiers and the four corrupted as well), Acausality | Reality Warping, Creation (Assisted in the creation of the universe)

Attack Potency: Unknown (Setting him free, according to Elika, would cost the life of everything on the planet) | At least Universe level (Pre-existed the universe and assisted in its creation, maintaining its balance until he decided to try and displace his brother, Ormazd. Stated to be equal to Ormazd, who had complete control over the universe as his counterpart; he was only sealed due to being tricked by Ormazd)

Intelligence: Above Average (Predated the universe, and assisted in its creation, as such, he should know far more than most beings)

Retrieved from "https://vsbattles.fandom.com/wiki/Ahriman_(Prince_of_Persia)?oldid=6598606"
Community content is available under CC-BY-SA unless otherwise noted.