VS Battles Wiki
Register
Don't have an account?
Sign In
Advertisement
in: Tier 9, Tier 9-B, Characters,
and 40 more 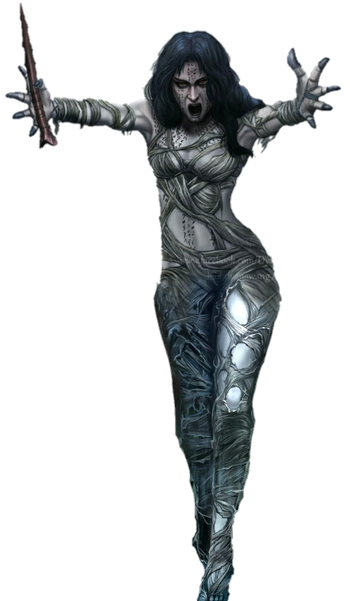 Ahmanet is an ancient Egyptian princess whom was promised by her father, the Pharaoh, that she would one day be the Queen of Egypt. However after her father bore a son, he broke his promise to Ahmanet: instead of naming her as his heir, he chose to name his son the Pharaoh. Infuriated by this betrayal, she forges a pact with the Egyptian god of death, Set, which subsequently unleashes dark forces on the earth. With her newfound powers, she murders her father and as punishment is mummified alive and entombed within an ornate sarcophagus, sealed away and hidden for millennia. Centuries later, she was excavated by American military forces under the employ of the United Kingdom, with the directive to bring the sarcophagus back to London. Ahmanet awoke and her powers summoned forth powerful storm-force winds and a flock of birds to crash the plane en route back to the UK, with the primary protagonist, Nick Morton, still aboard. As her powers slowly grow throughout the movie, she seeks to unleash her powers onto the world and remake it as the kingdom she was deceived out of obtaining.

Powers and Abilities: Superhuman Physical Characteristics, Accelerated Development (Learnt perfect English after staying in modern era for a few days), Acrobatics (As shown here), Magic, Flight, Immortality (Types 2, 4 and 7: She can survive in her mummified, corpse-like state, and whenever she is removed from her tomb she resurrects back to life), Life Absorption and Healing (Low-Mid; Can absorb others' life force to rejuvenate herself, from a decayed corpse-like appearance back to her looks in her prime), Necromancy (As shown here), Animal Manipulation {Can control birds and insects), Mind Manipulation (Can control people through spiders), Curse Manipulation and Power Bestowal (Can select ones to become the vessels of Set, granting them powers and she is able to subconsciously control them and give them visions), minor Body Control (Can expel all the mercury in her body through vomiting), Weather Manipulation, Air Manipulation and Sand Manipulation (Can summon and control an entire sandstorm), minor Sound Manipulation (Her screams can cause notable pain to people across the room) and limited Resistance to Tranquilizers (Only weakened by the tranquilizers which can instantly knock out regular humans). Soul Manipulation with the Dagger of Set (Anyone who is stabbed with the dagger will be implanted with the Egyptian god of death, storms, and chaos, Set, killing them in the process)

Attack Potency: Wall level (Can snap chains and destroy church pews by throwing someone at them. Should be superior to her zombies, which can tackle people through dilapidated stone walls.) Far higher Environmental Destruction with powers (Can summon and control an entire sandstorm)

Range: Standard melee range, hundreds of meters with Weather Manipulation, Unknown with Curse Manipulation (Can at least affect you anywhere in the world with a curse)

Weaknesses: Mercury seems to keep her at bay when imprisoned, although not for long