VS Battles Wiki
Register
Don't have an account?
Sign In
Advertisement
in: Characters, Digimon, Protagonists,
and 66 more 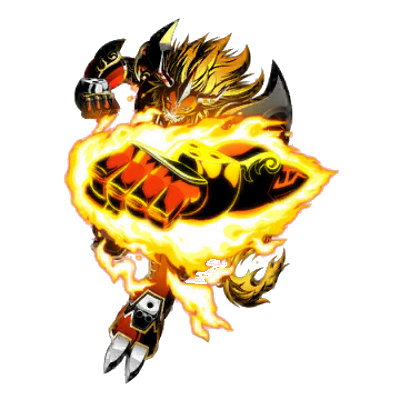 Agunimon is a Digimon that possesses power over Flame which bears the might of one of the legendary Ten Warriors. Because its "Digicore" is wrapped in the Spiritual Fire which is called a holy blaze, it is able to freely manipulate flames. It is an incarnation of the "Firewall" that defends the Net, and is a guardian deity. Because of its easily fired-up personality, it has a soldier-like aspect that practices mental training with yoga exercises, and its way of speaking is somewhat archaic, like a kenpo artist. In battle, it fights by freely using Oriental martial arts, and accumulates flames at one point of its body with a trick that focuses its spirit, to raise its offensive ability. 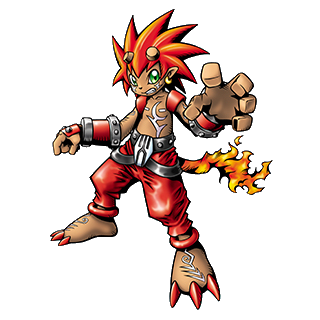 A Digimon that was transformed into a half-beast, half-man form when Agnimon lost its power. It is missing the "Combat Instinct" that Digimon naturally possess, and moreover, it has lost power. However, it is a being that has inherited a Spirit of the legendary Ten Warriors who possess ultimate strength, so although it has lost power, ordinary Adult-class Digimon aren't a match for it. If anything, it has kindness inappropriate for a Digimon and is similar to an Adult Digimon, counterbalancing its mischievous part. 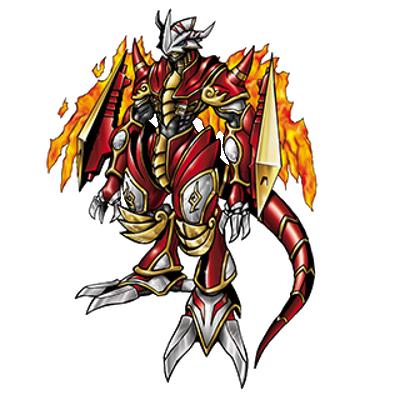 A Digimon that possesses power over Flame which bears the might of one of the legendary Ten Warriors. This firefighter has skin that can withstand high temperatures and the ability to move even through lava, and snuffs out flames with instant, explosive blazes. It is said that it was born from active volcano research data, and it is thought that it contains an immeasurable, unknown energy. The name of the fire dragon, who is considered the nemesis of the thunder god Indra of Indian mythology, is embodied in its ferocious nature. The more heroic its tactics and the more powerful the opponent is, the more it burns with combativeness. It also has a reckless side that doesn't understand retreating, even in a disadvantageous fight. 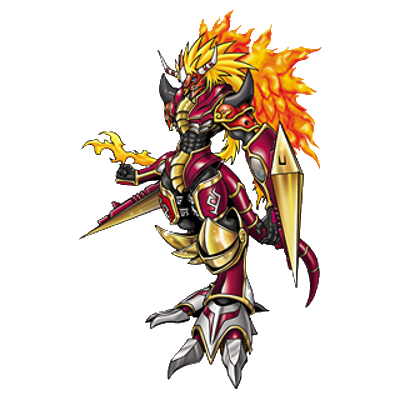 A Digimon that possesses power over Flame that has transcended legend by inheriting all the might of one of the legendary Ten Warriors and acquiring unknown abilities. Although it makes many enemies with its rough behavior, its name is derived from the fused form of a god of Indian mythology, and since it possesses both the wildness of a beast and the intelligence of a human, it is a Demon God that fights by converting anger or fear into righteous strength. In battle, it unleashes super-wide ranged attacks that melt everything then burn it up without a trace. This aspect has enough destructive power, in that moment, to bear a close resemblance to the menace of modern nuclear weapons. 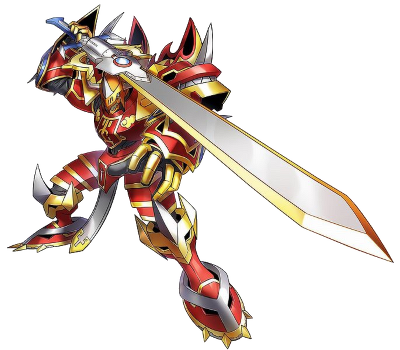 A Transcendent-species Digimon that possesses power over Flame which is said to have surpassed even the might of the legendary Ten Warriors. It is said to bear the power of the nine dragon's veins that flow through Gaia, and it has been prophesied that if it can restrain the might of the nine dragons, it will demonstrate unfathomable ability and even be able to rule Gaia. It is said that, in order to control their power, it possesses the "Ryūgonken" in which the dragon's souls are sealed.

Takuya Kanbara (神原 拓也, Kanbara Takuya) is a main character from Digimon Frontier. He was chosen to inherit the Legendary Spirits of Fire left behind by AncientGreymon, allowing him to use Spirit Evolution to become one of the Legendary Warriors.

Age: Unknown as Agunimon | 11 as Takuya

Superhuman Physical Characteristics, Digimon Physiology, Holy Power, Darkside Power, Regeneration and Duplication (Mid-High. As long as a single flame remains, he will regenerate and produce another Flamon. Digimon are also able to completely regenerate their wireframes even after they are destroyed, forming the Digitamas, although this is combat applicable), Fire Manipulation (Utilizes the flames of the firewall in which are so powerful than they surpass the power of the purifying flames of the Dark Area. This is shown when Cerberumon who is immune to the effect of the Dark Area's Hellfire could not resist the flames of the Firewall), Expert Martial Artist, Duplication (Each time he regenerates, another one of him is formed from his flames).

All previous abilities amplified, Statistics Amplification, Resistance to Fire Manipulation, Existence Erasure (Was able to enter the Dark Area and not get erased from existence), Hellfire Manipulation and Conceptual Erasure (As an incarnation of the Firewall, Agunimon should naturally be resistant to the flames of the Dark Area).

Attack Potency: At least Island level (Stated to be stronger than most Adult Class Digimon to the point in which they aren't a match for him) | At least Island level (Far superior to Flamon who is only half of his full power and yet can still easily beat Champion level Digimon) | At least Large Island level (According to the Databook he generates flames equal to the core of the Sun and was created by the data of an active volcano. Should be easily superior to most other Ultimate level Digimon) | At least Planet level (Stated to have inherited all of the power of AncientGreymon, whose power is declared to "surpass that of current Megas" and is the progenitor of WarGreymon) | Complex Multiverse level (Stated to have surpassed AncientGreymon in every regard, defeated Cherubimon alongside MagnaGarurumon. Eventually manage to defeat Dynasmon)

Speed: Massively Hypersonic+, with Relativistic reaction and combat speed (Equal to other Champion Digimon such as Flamedramon) | FTL (dodged KendoGarurumon's Lupine Laser, which is composed of sunlight) | FTL | FTL (Equal to AncientGreymon) | Immeasurable (Comparable to the Royal Knights and superior to Cherubimon)

Lifting Strength: Peak human for Flamon (Judging from his other feats) | Class 5 for Agnimon and Vritramon (Scaling to Fairymon and Wolfmon in episode 18 who could handle Trailmon [train-like Digimon]) | Class 5 | Immeasurable

Intelligence: Takuya, being a normal teen, is somewhat hot-blooded, reckless, and emotional. However, in all of his Digimon forms he is an expert-hand-to-hand combatant, going toe-to-toe with Ultimate-level Digimon in as early as his first transformation. As he matures and becomes more acquainted with his abilities, he quickly takes a leadership role and has come up with fairly ingenious strategies to defeat his foes when brute force does not work (i.e. having his friends combine their attacks to prevent Sakkakumon from absorbing and redirecting them).

Weaknesses: Tends to act without thinking and is very stubborn. Due to inheriting the power of AncientGreymon, he's vulnerable to Dragon Slaying attacks such as WarGreymon's Dramon Killers.

Note: Many of EmperorGreymon's abilities are inherited from the 10 spirits he used to gain this form. These Digimon are Kazemon, Kumamon, Arbormon, Grottomon and their Evolutions. 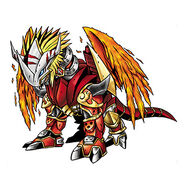 AncientGreymon lives on in Takuya, who wields the Spirits of Flame he created. 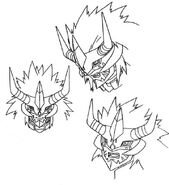 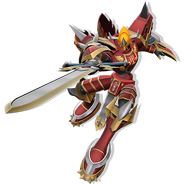