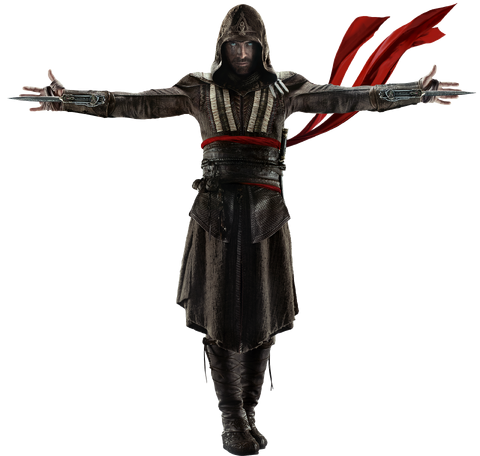 Aguilar de Nerha (1455 – 1526) was a Master Assassin and eventual Mentor of the Spanish Brotherhood of Assassins during the late 15th and early 16th century. He is also an ancestor of Callum Lynch through the maternal line.

Aguilar played a prominent role in the Brotherhood's actions during the Spanish Inquisition, a period of time in which many members of his Order were captured and executed by the Inquisitors, who acted under the direction of the Templars. He thwarted an attempt by the Grand Inquisitor and Master Templar, Tomás de Torquemada, to obtain an Apple of Eden in order to bring Spain completely under Templar control.

He first appears in the Assassin's Creed movie, played by Michael Fassbender, then again in Assassin's Creed Rebellion, where it is canonically proven that the latter meets Master Assassin Ezio Auditore da Firenze.

Tier: At least 9-A physically, higher with his Hidden Blades

Age: 36-37 during the events of the movie and Rebellion. 71 at the time of his death

Attack Potency: At least Small Building level+ (On par with Ezio Auditore da Firenze, also fought against the latter's comparably-strong Templar enemies in Assassin's Creed Rebellion. Should be comparable in strength to his Assassin allies, who eventually fought against and killed Tomas de Torquemada and his clones, with Torquemada having his power amplified with the Staff of Eden and Apple of Eden combined)

Speed: At least Supersonic+ (Can keep up with the likes of Ezio and his foes)

Durability: At least Small Building level+ (Took hits from Templars physically on par with Ezio. Traded blows with Ojeda, who took off parts of a pillar off with his sword. High falls from buildings are of little to no concern to him. Later performed the infamous Leap of Faith into a river below by the end of the film)

Intelligence: Above Average. A capable fighter, Aguilar could handle himself against multiple enemies in both armed and unarmed combat, wielding a range of weapons including swords and spears with great skill. Additionally, he proved to be proficient at archery, using a bow and arrow to deadly effect in both long and close range combat.

Like many Assassins, Aguilar was also trained in freerunning, being able to move across the rooftops of Seville quickly and creatively, ducking in and out of buildings and dashing across ropes in an effort to lose his pursuers. He also mastered the Leap of Faith, using it on two separate occasions to escape from his enemies.

Eventually, he was able to rise to the rank of Master Assassin in his later years and eventually, as Mentor of the Spanish Brotherhood.

Retrieved from "https://vsbattles.fandom.com/wiki/Aguilar_de_Nerha?oldid=6960982"
Community content is available under CC-BY-SA unless otherwise noted.