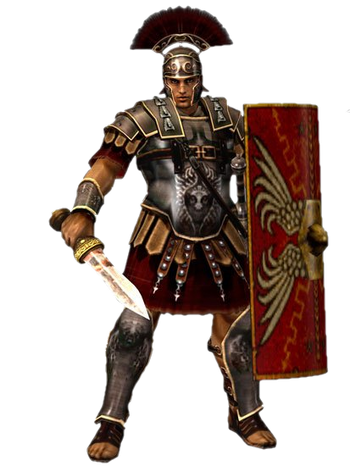 Agrippa was a Centurion in the Roman Legion that was forced to fight in gladiatorial arenas after trying to stop his fathers execution, who was accused of murdering Caesar.

Age: Unknown, seemingly in his 30s

Speed: Athletic Human (As a renowned gladiator and a soldier in the Roman army it should be roughly this high)

Striking Strength: Wall Class (Fought and defeated Barca who can perform the same feat as he can)

Standard Equipment: A Gladius and a Scutum

Intelligence: Gifted (Was acknowledged by Caesar to be a military genius and was promoted to the rank of Centurion at a young age)

Retrieved from "https://vsbattles.fandom.com/wiki/Agrippa?oldid=6600455"
Community content is available under CC-BY-SA unless otherwise noted.