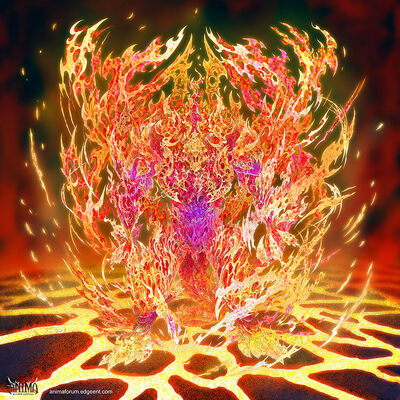 Tier: Likely 7-B. At least Low 6-B with Inferno

Attack Potency: Likely City level (Not much behind Zhoul Orgus. Around the strongest Superior Elemental). At least Small Country level with Inferno (Attack equals the offensive stats of Filisnogos and Rudraskha). Capable to Increase its combat abilities up to +50, making it comparable to the likes as Filisnogos

Speed: Athletic Human with at most Massively Hypersonic+ combat speed (Comparable to the Arias Vayu)

Lifting Strength: Class M (Baseline strength to move mountains), higher with preparation (With Feats of Strength 100, it have no issues to increase his STRength by +1)

Weaknesses: If over half of an Agni’s body is hit with cold water or ice, it must pass a PhR 180 check (Less than 80% chance to fail in normal conditions) or take damage equivalent to five times its level of failure. Each 1,000 points of damage sustained from this will cause it to lose a temporary point of Agility, Dexterity, and Strength.

Retrieved from "https://vsbattles.fandom.com/wiki/Agni_(Anima:_Beyond_Fantasy)?oldid=5099129"
Community content is available under CC-BY-SA unless otherwise noted.