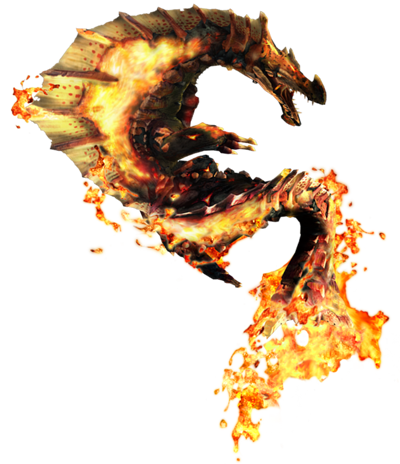 Agnaktor is a large Leviathan which was first introduced in Monster Hunter 3 or Monster Hunter Tri. This Leviathan inhabits volcanic areas and is the adult form of Uroktor. Agnaktor are quite aggressive, challenging all others that encroach on its habitat, due to the fact that it has no natural predators at an adult age. The only threat that it encounters is if a monster challenges it for territory or food.

Superhuman Physical Characteristics, Statistics Amplification (Becomes stronger, faster and more durable when enraged), Rage Power, Sound Manipulation, Earth Manipulation (Can dig through volcanic rock and can cause volcanic eruptions), Large Size (Type 0 in terms of height; Type 1 in terms of length), Magma Manipulation (Capable of attaching pieces of magma to its body, which are soft and vulnerable when hot, but incredibly hard when cooled, capable of firing a beam of lava and heat), Resistance to Thunder (When covered in obsidian), Fire (When covered in hot magma) and Disease Manipulation

Same as regular Agnaktor, except Magma Manipulation, and the addition of Mind Manipulation

Stamina: High (Can fight several opponents for tens of minutes and still be able to fight) | High | High | Unknown | Unknown

Uroktor
Add a photo to this gallery