VS Battles Wiki
Register
Don't have an account?
Sign In
Advertisement
in: Tier 8, Tier High 8-C, Tier 8-B,
and 31 more 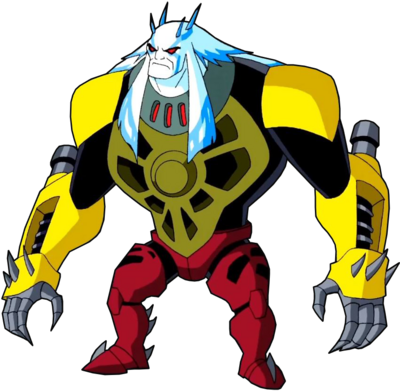 Aggregor is an Osmosian intergalactic criminal whose main objective was to get to the Forge of Creation and absorb the powers of an infant Celestialsapien (which he refers to as the "Ultimate Prize") to gain unlimited power and rule the universe. He journeyed throughout the galaxy collecting pieces of the map by defeating enemies, solving complicated puzzles and going through various planets and locations.

Attack Potency: Large Building level (Easily defeated Armored Kevin) | City Block level (Has the combined strength of Bivalvan, Galapagus, P'andor, Andreas, and Ra'ad plus his own. Was able to easily defeat Humungousaur with no difficulty), can ignore durability with Life Absorption

Durability: Large Building level | At least City Block level (Described himself as invulnerable. Was completely unharmed by punches from an angry Humungousaur, is more durable than he is strong)

Standard Equipment: His Spear | None notable

Intelligence: Extraordinary Genius. Is implied to have made his spear and his machine to absorb 100% of 5 Andromeda aliens' powers, can also couple Professor Paradox's Entropy Pump to this machine. Considers himself intellectually superior to Brainstorm. Made a very complex plan to gain absolute power by absorbing a baby Celestialsapien and nearly succeeded.