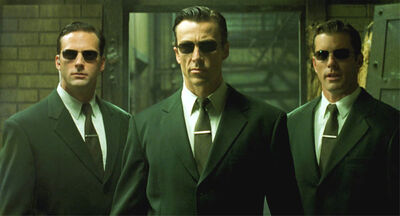 Programs tasked with protecting the integrity of The Matrix and eliminating threats to it, such as anything that could potentially reveal the truth of its nature to its inhabitants, Morpheus describes Agents as "everyone and no one." Often working in trios, they are somewhat omnipresent within the Matrix, and can take control over any human still connected to the system (a Bluepill). Agents are also tasked with deleting obsolete programs, as revealed with the Keymaker in Reloaded.

By the time of The Matrix Revolutions, Smith had made everyone connected to the Matrix a copy of himself, so Agents seemed to have disappeared.

Gender: Technically inapplicable. Most of them appear male.

Powers and Abilities: Superhuman Physical Characteristics, Skilled at martial arts and marksmanship, Pseudo-Omnipresence throughout the reality of the Matrix via Possession of bluepills, Clairaudience with other agents via their earpieces, Immortality (Type 6, can body-jump to another inhabitant of the Matrix after their current host's death)

Attack Potency: Wall level (Can easily destroy thick walls with their punches) | At least Wall level+ (Stronger then before)

Durability: Wall level (They can take hard hits from characters like Neo and still come back for more. However, they mostly rely on their speed, as their essence still occupies a human body and can thus be put down if hit severely enough. This was shown when Trinity shot one in the head in the first film, which killed the human he occupied and thus forced him to leave the fight) | At least Wall level+

Stamina: Limitless due not being alive

Range: Standard melee range, up to Hundreds of meters with Desert Eagle

Intelligence: Gifted. As the caretakers of the Matrix, Agents are deeply in-tune with the happenings inside the system.

Standard Equipment: A .50 AE Desert Eagle, an earpiece that allows them to communicate with other agents

Start a Discussion Discussions about Agents (The Matrix)