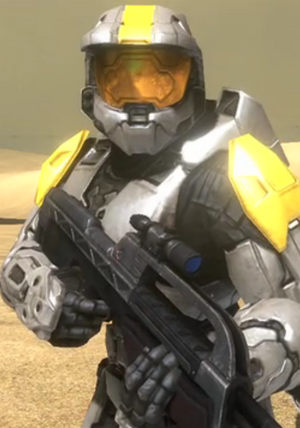 Freelancer Agent Washington, also known as Recovery One, Prisoner 619-B, real name David, or simply Wash for short, is the main protagonist in both his eponymous mini-series and Reconstruction, acts as the secondary antagonist for a majority of Revelation, and afterwards becomes a main character in Red vs. Blue as a member of the Blue Team.

Age: At least 30 (He was around in project Freelancer for quite a while)

Speed: At least Supersonic combat speed (Can bullet time with ease and even outran bullets and explosions)

Lifting Strength: Superhuman (He hasn't shown many feats in this regard)

Durability: Small Building level (Took mine explosions and he was just dazed, got ran over by a Warthog that could destroy walls by ramming them and he had no injuries, took a rocket-propelled grenades and he was still in good shape; should be comparable to other Agents)

Weaknesses: He is quite bad at expressing himself and has trust issues

Retrieved from "https://vsbattles.fandom.com/wiki/Agent_Washington?oldid=4611860"
Community content is available under CC-BY-SA unless otherwise noted.