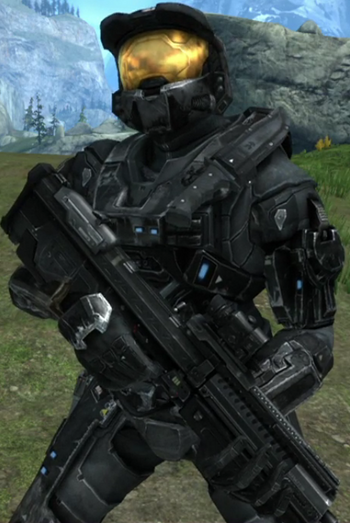 Freelancer Agent Texas, also known as Artificial Intelligence Program Beta, real name Allison, or simply Tex for short, was one of the main characters in Red vs. Blue. In short, Tex is a symbol of Church's failures and is thus doomed to fail in any circumstance regardless of how much she tries (for obvious reasons this isn't considered). She plays a key role in protecting the Reds and the Blues and is often said to kill anyone for money.

Durability: Small Building level (Able to take the force of tanks as well as take on small-scale explosions as well as firearm wounds to some extent)

Stamina: Superhuman, possibly Infinite (Due to being an A.I. with an artificial body)

Intelligence: Above average. A highly skilled fighter, able to take down three Freelancers - two of which were rated as the most skilled and one of which is credited as the physically strongest - and a gifted engineer and combatant

Weaknesses: Always fated to lose due to faulty programming (Though this is plot armor and should likely be ignored)