VS Battles Wiki
Register
Don't have an account?
Sign In
in: Characters, Movie Characters, The Matrix,
and 26 more 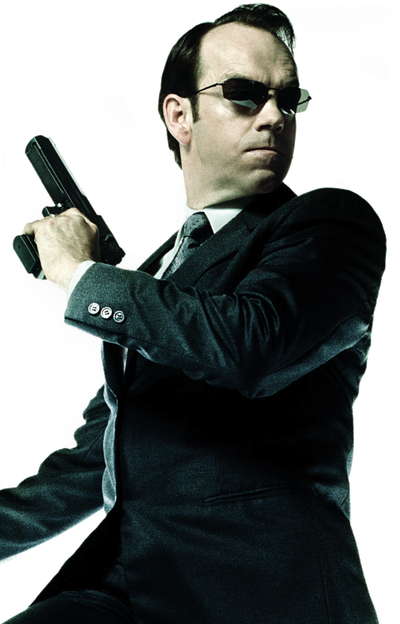 Agent Smith (later simply "Smith") was an Agent of the Matrix and Neo's arch-nemesis. After being initially destroyed by Neo, he became an Exile program and manifested as a computer virus. As an enemy consistently able to genuinely challenge Neo, and then later the Machines and the Matrix itself, he is considered the primary antagonist of the series.

Age: Likely inapplicable as he is a computer program-turned virus. He appears to be in his early to mid 40's.

Powers and Abilities: All of the standard powers possessed by an Agent, plus Minor Reality Warping | Superhuman Physical Characteristics, Martial Arts and Weapon Mastery, Self-Duplication via Possession, Assimilation, Minor Reality Warping | Same as before, plus Flight, Precognition, Limited Invulnerability, Telekinesis, Reality Warping, Regeneration (Low-Godly; due to having assimilated the entirety of the Core Network of the Matrix)

Attack Potency: Wall level (Stronger than a normal agent, can bust walls with this much energy) | At least Wall level+ (Any given copy of Agent Smith is roughly on-par with an upgraded Agent, and could stagger Neo with punches) | Large Island level+ (Fought on par with Neo, who generated this much energy, defeated him without much damage to himself)

Speed: Superhuman with Supersonic reactions/combat speed (As an Agent before his power upgrade into a virus, he was able to dodge bullets; Morpheus has said that Agents have dodged entire clips being fired at them without issue) | Supersonic+ (Was able to tag Neo with numerous hits) | Massively Hypersonic+ (He is on-par with Neo)

Durability: Wall level | At least Wall Class+ | Large Island level+ (Can take hits from Neo without much trouble, also the nature of his existence in this state makes him extremely hard to kill)

Stamina: Very high. Inside the Matrix, he engaged in an intense fight with Neo and did not look the least tired.

Standard Equipment: As an Agent, he always carried around a .50 Desert Eagle. In the second and third films, he relies more on his martial arts skills and his ability to manipulate the coding of the Matrix but still carries a Desert Eagle on all his copies.

Intelligence: Gifted. He routinely forms and speaks of abstract philosophical concepts and manipulates his enemies.

Weaknesses: Same as a regular Agent. | None notable for matchups. Could only be destroyed by an assimilated Neo who had a connection to the Source. He is sort of a masochist.